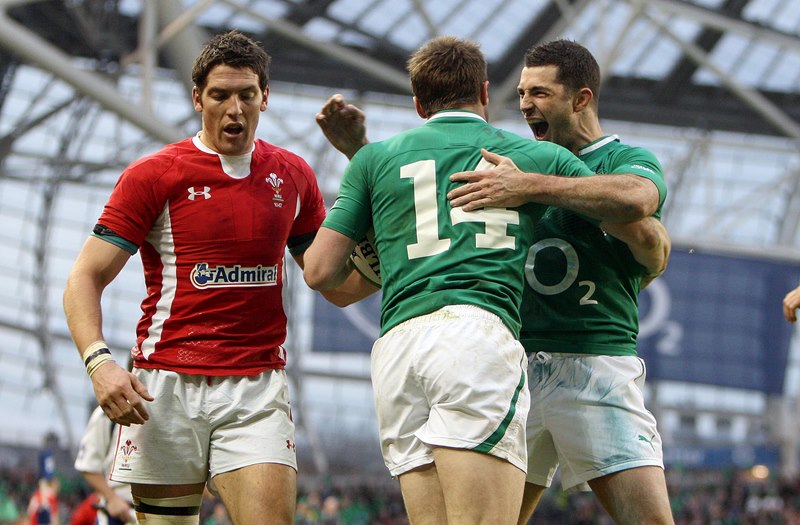 The Six Nations returns after a rest weekend and Ireland have an exciting clash with Wales to look forward to in Dublin on Saturday.

The Irish, who have won two out of two so far, are looking to dethrone the English and will likely need a win over the Welsh to do so.

Wales started their Championship with a great win over Scotland, but couldn’t find a way past England last weekend.

To get you in the mood, we look back on three historic matches between the two sides.

And don’t forget to enter our Six Nations competition, the Ultimate Fan Prize, which could see you and some lucky mates heading down to Twickenham on Paddy’s day in a private jet!

Ireland and Wales began their 2016 Six Nations campaign with a stalemate at the Aviva Stadium, drawing 16-16.

The home side started the stronger, taking a 13-0 lead after half an hour, thanks to a pair of Johnny Sexton penalties and a Conor Murray try, the scrum-half diving over the line on 26 minutes.

Wales hit back with a Rhys Priestland penalty and a Taulupe Faletau try shortly before half-time, the No.8 muscling his way over to score.

There were fewer opportunities in the second half, with both sides limited to penalties.

Wales took the lead for the first time with eight minutes left on the clock, but Sexton responded with his third penalty of the match, and the teams had to settle for the draw.

In 2012, Wales secured a win in Dublin with a Leigh Halfpenny penalty in the 79th minute.

Jonathan Davies struck first for Wales, stealing in for a try in the corner, but Rory Best hit back to make it 10-5 at half-time.

Davies scored his second try of the match following an offload by George North, but Sexton’s penalties kept Ireland in the game.

Ireland took a six point lead with 10 minutes to go when Tommy Bowe finished in the corner, but Wales fought back.

A North try brought the Welsh to within a point, but Halfpenny couldn’t convert from the touchline.

As the time ticked away, Halfpenny had the opportunity to make amends, and he duly did, slotting the penalty home and snatching the victory.

Going back to 2003, Ireland enjoyed dramatic late success of their own as Ronan O’Gara’s drop goal cancelled out one from Stephen Jones to set up a final round Grand Slam shootout between Ireland and England.

Jones scored an early try before Ireland edged ahead through a string of David Humphreys penalties and a Keith Gleeson try.

In the second half, Gleeson’s second of the game seemed to have given Ireland enough breathing room, but Wales fought back with tries from Martyn Williams and Gareth Thomas.

Jones thought he had won the game for Wales with a late drop goal, but just 30 seconds later, Ronan O’Gara responded with one of his own to hand Ireland a memorable win.