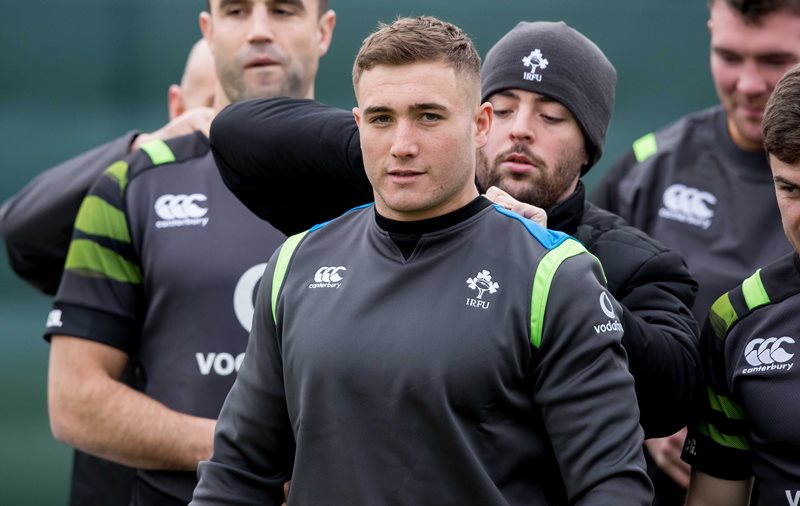 Ireland have the perfect chance to extend their winning start to the 2018 Six Nations when Italy visit the Aviva on Saturday (kick-off 2.15pm).

As Ireland bid for Six Nations success, here’s the XV we would select to take on the Azzurri at the weekend.

A match-up against Italy is the perfect time for another wonderkind to get his Six Nations chance – it’s Larmour time.

A constant threat with powerful running in Paris and claimed Johnny Sexton’s cross-field kick to help set up the match-winning moment against the French. Inked in on every Schmidt team sheet.

The 24-year-old has filled huge boots at 10 and is a tigerish defender. Made 10 tackles in the midfield on Saturday.

Building partnerships will be key to this campaign and with no Garry Ringrose, Aki ought to get game time to gel alongside his former Connacht colleague Henshaw in the three-quarters.

McFadden has shown his value to the Ireland squad time and time again since making his debut in 2011 and 30-year-old will no doubt make an impression in Dublin once again.

Johnny Sexton may have produced THAT drop goal in Paris but Joe Schmidt should opt to save his talisman for tougher tests down the line and Joey Carbery is more than capable of filling the Leinster man’s shoes.

Murray was well wrapped-up by the French but in tricky handling conditions, it was another masterclass from the Munsterman, who remains an influential cog in this Ireland squad.

There’s plenty of competition in the front row but Jack McGrath should certainly be included in the starting XV. Ever reliable, the British & Irish Lion will be able slot into the front row beautifully.

A victory over opposite number Sergio Parisse’s side will heighten Best’s belief he can lead his country to a Six Nations triumph.

The Leinster prop took plenty of punishment in the loose in Paris and will show up for you week in, week out.

Iain Henderson may have shown his value in the second row but Devin Toner is a worthy starter and brings plenty of experience to the pack.

The 24-year-old has been hugely impressive for Connacht this campaign and despite James Ryan’s impressive display last time out, Dillane deserved a chance to show his blossoming reputation.

Ireland’s heart and Munster’s centre of gravity, the British & Irish Lion should have some success in disrupting the Italian lineout.

Brought on for injured Van Der Flier last weekend, Leavy was lively in the second half despite conceding a crucial late penalty. He’s the obvious replacement.

One of the first names on the teamsheet, Stander is a voracious ball-carrier and his battle with Italy skipper Parisse should be worth the admission fee alone.

THE LATEST RANGE OF IRELAND RUGBY JERSEYS, TRAINING WEAR AND FAN-WEAR IS AVAILABLE TO PURCHASE IN STORE AND ONLINE. CLICK HERE TO SHOP NOW