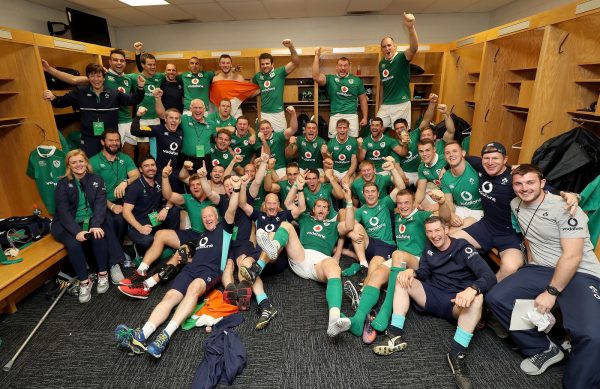 Ireland have endured an up and down 2016, but look in excellent shape after some scintillating displays in recent weeks.

Particularly pleasing for Joe Schmidt’s side were the eye-catching displays in the autumn internationals and the emergence of young stars such as Joey Carbery and Tadhg Furlong ensure their future on the world stage is looking rosy.

They also became the first northern hemisphere side since England in 2003 to defeat Australia, South Africa and New Zealand in a calendar year.

England famously went on to win the World Cup that year, and Ireland will be hoping to create history of their own in February and March as the Six Nations returns, while there is also a Lions tour on the horizon with plenty of Irishmen looking to state their case in 2017.

Ireland recorded their first ever victory over an All Blacks side in scintillating fashion in Chicago, as part of the United States festival of rugby to promote the sport in the country.

Not just any New Zealand team either, Steve Hansen’s formidable world champions are considered to be among the greatest international side to have played the game.

They were on a Tier One world record run of 18 straight victories and the double world champions were unbeaten in 2016.

But they were coming up against an inspired Irish team, and from the tribute to Anthony Foley before the game kicked off, followed by tries from Jordi Murphy, CJ Stander, Conor Murray, Simon Zebo and Robbie Henshaw there was only going to be one winner. Ireland became only the third team in history to score 40 points in a game against the All Blacks.

Just to add to the historical note, the win came in Chicago just after the Cubs had ended a long hoodoo of their own, winning the World Series after 108 years – but Ireland’s victory outdid even that, as they beat the All Blacks 111 years after the two teams met for the first time.

Another famous first for the men in green in 2016 was a first victory on South African soil over the Springboks. The win was all the more impressive as Schmidt’s side lost Stander to a controversial red card in the 23rd minute.

They even went down to 13 for a while when Henshaw was given a yellow card shortly before half-time, with the two teams level at 13 apiece at the break.

However, Ireland dug deep and battled like warriors as Murray and Jared Payne crossed, with Paddy Jackson adding 16 more with the boot including a late penalty to seal the victory.

Given their end to the year, the Irish will look back with regret at their inability to close out a series victory, after letting a big lead slip in the second Test, but in the absence of the likes of Johnny Sexton, Sean O’Brien and Rob Kearney, this was a sign of things to come.

Despite the victory over New Zealand grabbing the headlines for Ireland’s autumn internationals campaign, the pulsating win over the Wallabies was another reason Irish eyes were smiling in 2016.

Skipper Rory Best won his 100th cap for his country, becoming the fifth man to do so after Brian O’Driscoll, Ronan O’Gara, Paul O’Connell and John Hayes.

Iain Henderson, Garry Ringrose and Keith Earls all bagged tries in the win which completed the hat-trick of successes over the Southern Hemisphere’s big three.

It was the perfect way to cap off the November internationals and with all four provinces still very much in contention in European competition, Irish rugby looks to be in rude health.

Despite losing their RBS 6 Nations crown to Eddie Jones’ England, Ireland had their moments during acampaign that was decided on fine margins.

An opening draw against Wales, followed by a narrow defeat in Paris, left Ireland with a mountain to climb when it came to taking the title.

When they lost to England, any hopes of three in a row were put to bed, but the Irish finished strongly with a thumping win over Italy.

And the pick of their displays was a rollicking win over Scotland at the Aviva Stadium on the final day of the tournament.

A memorable try from Stuart Hogg was not enough for the Scots as Stander, Earls, Murray and Devin Toner crashed over for Schmidt’s side in a game that wasn’t as close as the final scoreline suggested.

And with Vern Cotter’s side coming into the game full of confidence after a win over France, it was an opportunity for Ireland to re-establish themselves as one of the leading sides in the Northern Hemisphere.

Schmidt’s strength in depth was evident as he saw his men record a comprehensive victory against Canada at the Aviva Stadium in the first November Test in Dublin, despite ringing 15 changes from the historic win over New Zealand seven days previously.

Eight players made their debuts as the hosts ran in eight tries, debutant James Tracy among them.

Perhaps the most promising part of it was the debut handed to Leinster centre Ringrose, who looks to be fulfilling his immense potential and could even be a Lions wild card if he can build on a strong start to 2017.

Regardless of what happens in New Zealand next summer, this performance was more evidence that Ireland’s strength in depth is as strong as it has ever been, and with Schmidt having signed a new contract in October, those players are set to benefit from the guidance of the Kiwi coach.