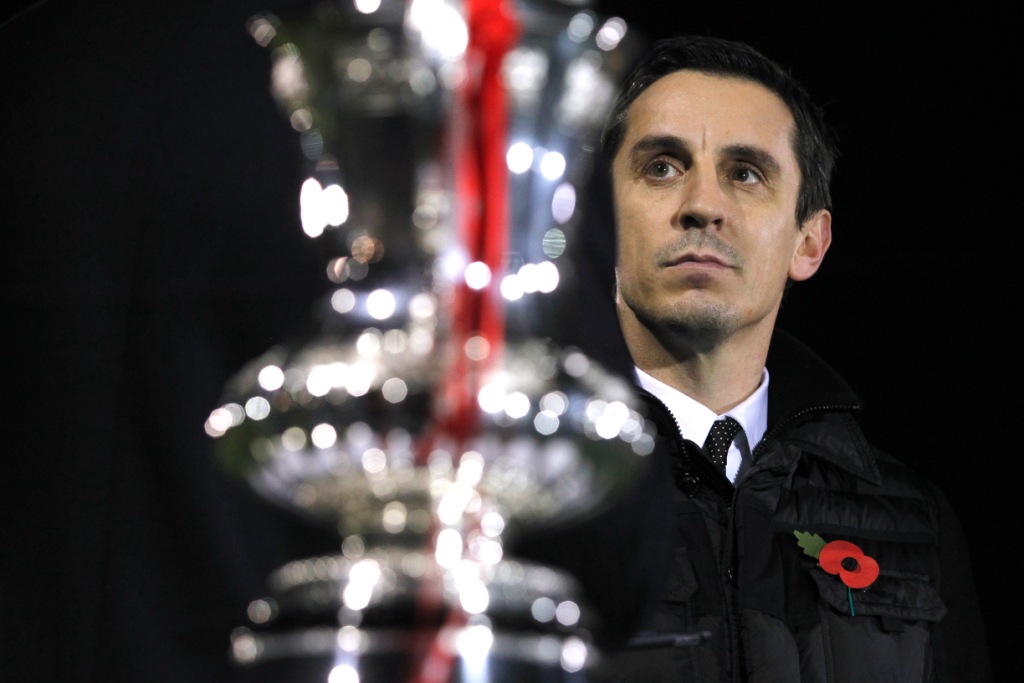 In at the deep end: Ten footballers turned managers who sunk or swam

Gary Neville’s appointment as Valencia head coach raised more than a few eyebrows this week, with the huge opportunity offered to England’s assistant coach also representing a massive risk for the Spanish giants. Aside from his duties with England and infamous ownership of local club Salford City, this will be Neville’s first foray into full-time management, but how have other footballers thrust into high-profile jobs got on?

Neville’s former teammate Giggs took over as Manchester United’s interim player-manager when Davis Moyes was sacked in April 2014, after less than 10 months in the job. In the final four games of the season, Giggs managed two wins, a draw and a loss, but admitted to breaking down in tears due to the pressure of managing United and lack of sleep during the period. As Louis Van Gaal’s assistant manager however, Giggs is still tipped as the Dutchman’s potential successor at Old Trafford.

Harry Redknapp’s assistant at Portsmouth, Arsenal legend Adams was put in charge after Redknapp fled to Tottenham. His reign was utterly disastrous and only lasted 16 games as he was sacked after picking up a measly 10 points. After the Portsmouth debacle, Adams became manager of Azerbaijani side Gabala, but mediocre results led to his departure in 2011.

Martin O’Neill’s current number two started his managerial career at Sunderland in 2006, a surprising appointment given he and club chairman Niall Quinn were famously on opposing sides during the fall-out from the Saipan incident. Keane’s first season was a clear success as he guided the Black Cats back into the Premier League and was awarded the Championship Manager of the Year, but despite keeping them up the following year inconsistent performances saw him dismissed the following season.

The controversial Dutchman won the 1997 FA Cup as Chelsea player-manager, the club’s first major trophy in 26 years. Gullit became the first non-British manager to win a major trophy in England, and the club also finished in a creditable sixth place in the Premiership. But after a disagreement with chairman Ken Bates he was sacked in 1998, and went on to coach Newcastle, Feyenoord, LA Galaxy and Terek Grozny with little success at any.

Loveable Italian Zola’s first job in management was a 19-month spell at West Ham, where he quickly gained the backing of the fans despite his association with London rivals Chelsea. After a solid first season where the young side displayed a flair not seen at Upton Park in years, Zola struggled in the 2009-10 campaign and after a 17th-place finish he was sacked.

Although he was not taken seriously at the time due to his inexperience as a manager, Rijkaard led Holland to the Euro 2000 semi-finals on home turf playing the best football of the tournament. They were beaten by Italy on penalties and Rijkaard immediately resigned, but five trophy-laden years at Barcelona were to follow.

Souness won the Scottish Championship and League Cup, beating Celtic 2-1 in the final, in his first season in charge at Rangers, but fans never warmed to him given the vast amount of money he spent during his tenure and disciplinary problems on the pitch. There were not many midfielders better than Souness in his era, but the fact that he’s been in the managerial wilderness for seven years despite his name value says all it needs to.

A hero in his time as a player on Tyneside, Shearer failed to save Newcastle from the drop when he was given eight games to rescue the club in 2009. In truth it was an almost impossible task, but the former England skipper has not managed since and looks set to stick with his BBC punditry duties for the time being.

After leaving Arsenal, Platt was controversially appointed boss of former club Sampdoria in December 1998. With other clubs protesting that Platt did not have the appropriate coaching qualifications for managing in Serie A, he lasted only six weeks before resigning and Sampdoria were relegated to Serie B later that season.

Liverpool legend Barnes went to manage Celtic under director of football Kenny Dalglish in 1999, however his much-hyped appointment was unsuccessful. Barnes was sacked shortly after their shock Scottish Cup defeat at the hands of Inverness Caledonian Thistle in February – which gave birth to the famous Sun headline ‘Super Caley go ballistic, Celtic are atrocious’.