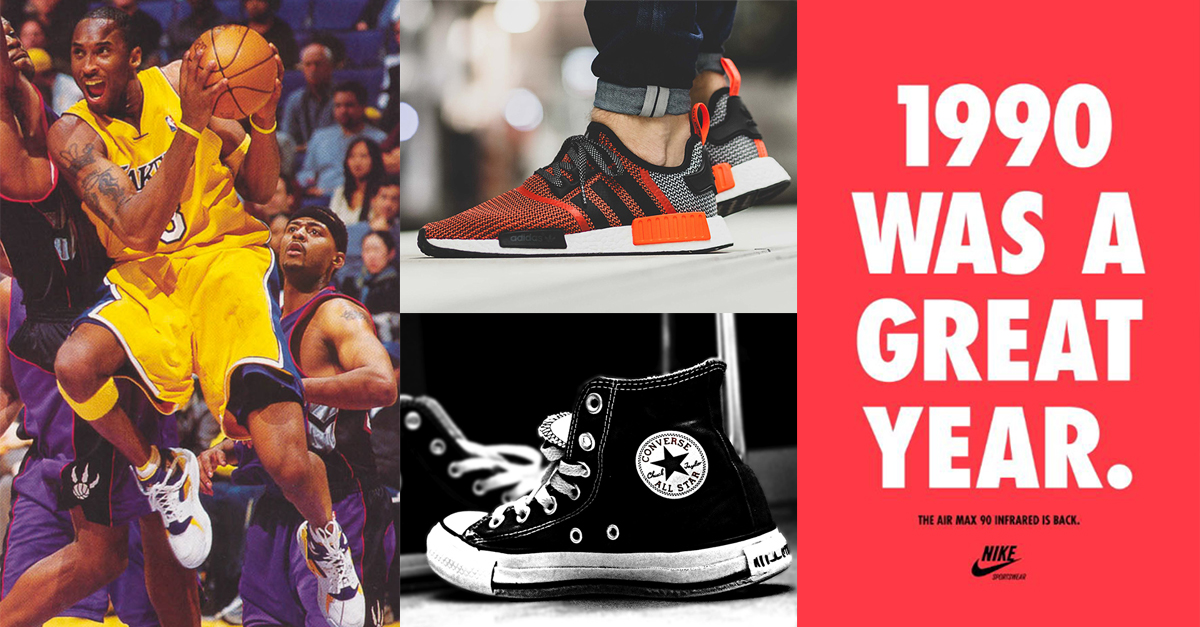 In the 1990s and 2000s, the trainer technology race heated up as giants of the footwear world fought to create increasingly innovative designs. In our last article, we take a look at some of the most iconic shoes of the past and pick out some icons for the future.

In 1990, Nike expanded the Air Max Family (in more ways than one) when they launched the new and improved Air Max II (later to become known as the Air Max 90) which dialled up the amount of cushioning in the sole. Things got even more pumped up with the Air Max BW (the BW stands for “Big Window” and references the chunkier air bubble on the heel) which pumped up the air technology to even greater heights. Then things got even more futuristic in the middle of the decade with the Air Max 95. Designer Sergio Lozano devised a startling sci-fi creation which added an air wafer to the front end of the shoe and a protruding bubble to the back. The whole thing was fitted out in an eye-catching grey and neon-green colourway which made it look like it had dropped in from 2095. With these forward-thinking designs, Nike’s Air Max family continued to dominate the industry throughout the decade and staked a convincing claim as the most iconic footwear range of all time.

While the Air Max dominated the streets in the early 90s, Nike also locked down the pro sports market with the release of the Nike Huarache. Another legendary design produced by Tinker Hatfield (does this guy ever sleep?) the Huarache was inspired by water-skiing shoes, with an inner neoprene lining which hugged the wearer’s ankle, and borrowed its name from a sandal worn by the ancient Mayans. Now that’s pedigree. The Huarache was also one of the first Nike shoes to do away with the iconic Swoosh, trusting that its radical design would make it instantly recognisable. And it worked. The Huarache dominated the basketball and running markets in the early part of the decade, with superstars like Michael Johnson showing off their Huaraches at the 1992 Olympics. From there, it was an easy step to the fashion market, with the shoe’s distinctive silhouette owning UK streets in the early ‘90s.

The Air Max towered over the decade like no shoe before or since, but at the dawn of the 2000s, Nike reinvented air technology with the arrival of the Nike Air Presto, and revolutionised shoe-sizing in the process. It’s fitting that it was Tobie Hatfield, younger brother of original Air Max designer Tinker Hatfield, who took the Air family to the next level. The younger Hatfield’s striking innovation was a v-notch in the heel of the Presto which helped it conform to the shape of the wearer’s foot. The original slogan used to market the shoe – “the t-shirt for your feet” – brilliantly embodied the Presto’s comfortable, casual cool, and its digitally printed graphics and foot-hugging fit made it an immediate collectors’ item on its release in 2000. With the Presto, Nike proved it was still a company with one foot in the future.

With Nike’s air technology blowing minds throughout the 90s, adidas needed to respond. And the iconic brand came roaring back in the 2000s with two shoes that reinvented their sportswear offering. First up, in 2002, was the adidas Climacool – which brought a different kind of air to the trainer market. Seeking a way to make running shoes as breathable as possible, adidas stripped the design down to its bare bones, producing a distinctive skeletal design that offered 360-degree ventilation for the wearer. Breathable materials may have moved on since, but this is one icon that has kept its cool to this day.

The adidas Tubular is another trainer that was undoubtedly ahead of its time. Unleashed on an unsuspecting public in 1993, the original design was inspired by a car tyre and came with a hand-held pump that could inflate or deflate the sole for a comfier fit. The Tubular’s ambitious design meant it was costly to manufacture and it was retired after only a few years. However, in 2014, adidas mastermind Nick Galway revisited some the original concept designs for the Tubular, going back to the “car tyre” concept and crafting a trainer with some serious bounce to the ounce. The new and improved Tubular is already staking a claim as a modern icon.

When it comes to iconic footwear, the Converse All-Star has some serious heritage. The All-Star first emerged way back in the prehistoric era (1917 to be exact) and its flexible canvas construction proved revolutionary at the time. Its popularity as a basketball shoe peaked in the early 60s, before technological innovations from Nike and adidas left it behind. However, the All-Star wasn’t finished yet. Its casual cool made it a favourite of rockers throughout the ‘70s and ‘80s and it came roaring back in the ‘90s as grunge-era icons like Kurt Cobain made it an essential part of their dressed-down look. In 1997, Converse reported selling 550 million pairs in one year.

Nowadays, the All-Star is beloved as one of the most versatile trainers of all time – just as easily paired with some ripped jeans or a swish suit – it’s the perfect fashionable look at any time of the day. In 2003, Nike bought out Converse, bringing the old-school company firmly into the 21st century. Since then, we’ve seen some minor tweaks to the technology behind the All-Star (including an ultra-comfortable Lunarlon insole and a tougher rubber construction) but Nike are smart enough to know that you don’t mess with a true classic. The instantly recognisable design of the All-Star has barely changed in six decades, which makes the beloved “Chuck” the longest lasting icon on our list.

One for the Future – adidas NMD

If there’s one design that has defined the trainer market in the past year – it’s the adidas NMD. Unveiled in late-2015, the NMD (which stands for Nomad) draws on the heritage of three classic adidas models – the Micro Pacer, the Rising Star, and the Boston Super – to create a trainer that’s undeniably futuristic while retaining its ties to icons of the past. The shoe gets its spring from adidas’s now familiar Boost technology (a revolutionary cushioning system built from thousands of foam pellets) and its flexibility from a Primeknit upper that eschews a rigid toe cap to conform to the shape of the wearer’s foot. But perhaps the NMD’s most recognisable feature are the striking red and blue colour blocks on the midsole, which help give the shoe support while also giving it an undeniable retro cool. Lightweight, stylish, and ultra-collectable, the NMD is a worthy heir to a long line of innovative adidas originals – and a true modern icon.

These iconic trainers defined the 1990s and 2000s. But like all true icons, they’ve continued to find new fans with each passing year. Become a part of their continuing story. Be Iconic Everyday