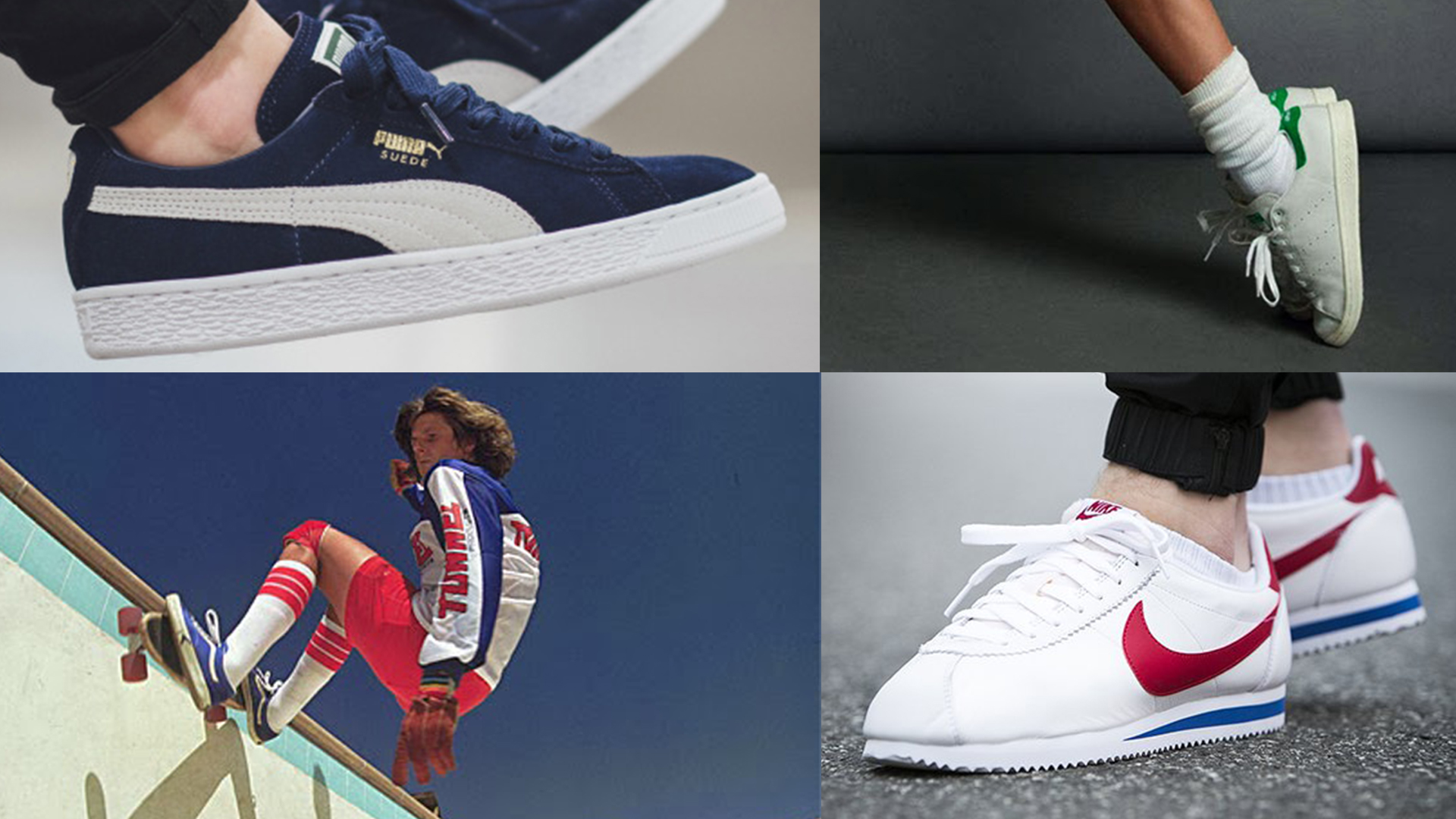 The ‘70s were the decade that trainers truly took over the world. It was the era that saw the birth of punk, disco, and hip-hop – and the arrival of some of the greatest icons in footwear history.

In other words, this was where the Sports Born, Street Worn revolution began.

Nike Cortez – Birth of an Icon 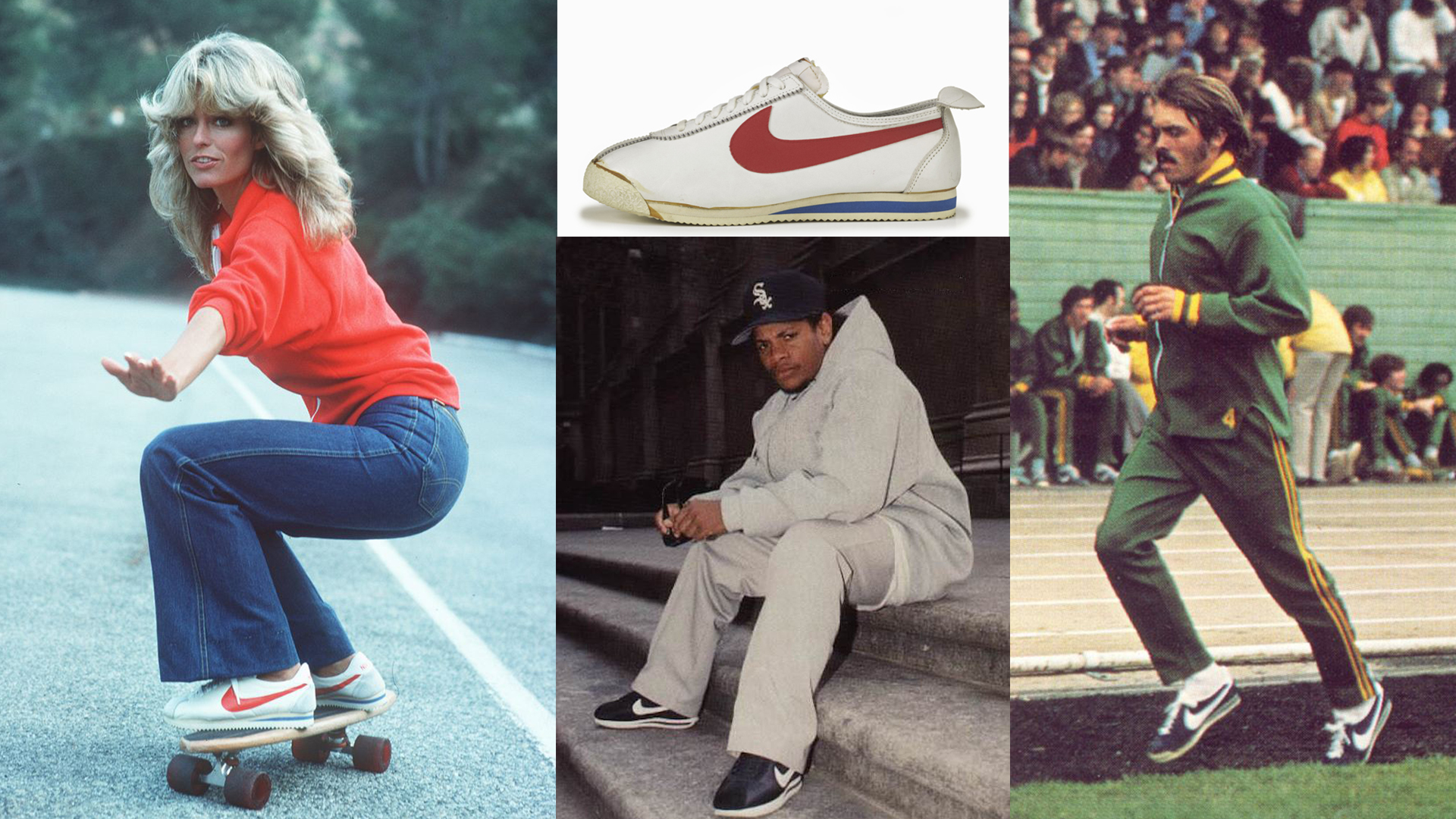 Nike have probably been responsible for more iconic shoes than any company in history, but the Nike Cortez is the granddaddy of them all. Way back in the early ‘70s, Bill Bowerman and his business partner Phil Knight were making a decent living from their business, Blue Ribbon Sports, importing Onitsuka’s trainers for the US market. However, after a falling out with the Japanese giant they decided to go it alone and rechristened the company Nike – after the Greek goddess of victory.

They had the name, but their young company still needed an iconic logo – and an iconic shoe to go with it. For the first, the pair turned to graphic design student Carolyn Davidson, who charged them just $35 for her work. Her new logo (quickly dubbed the “Swoosh”) was sleek, striking, and instantly recognisable. It would go on to have a seismic effect on sports style, paving the way for a host of stripped-down logos from leading brands.

For their signature shoe, the pair looked to the track. As an Olympic athletics coach, Bowerman knew everything there was to know about running shoes, and he put his mind to work creating a trainer that would stand up to the increasing demands of modern athletes. He named the revolutionary design he came up with the Nike Cortez.

The foam cushioning that Bowerman added to the Cortez put a serious spring in the step of any athlete who tried the new shoe. And the original colourway with its red, white, and blue detailing (subtly recalling the American flag) was dynamic, bold, and stood out a mile from its traditional looking competitors on the track. This was clearly a step into the future, and after the shoe’s starring role at the 1972 Olympics, the public responded by making it a sales phenomenon. Its popularity hasn’t flagged to the present day, and every classic Nike trainer since owes something to this original

adidas Stan Smith – From the Court to the Catwalk 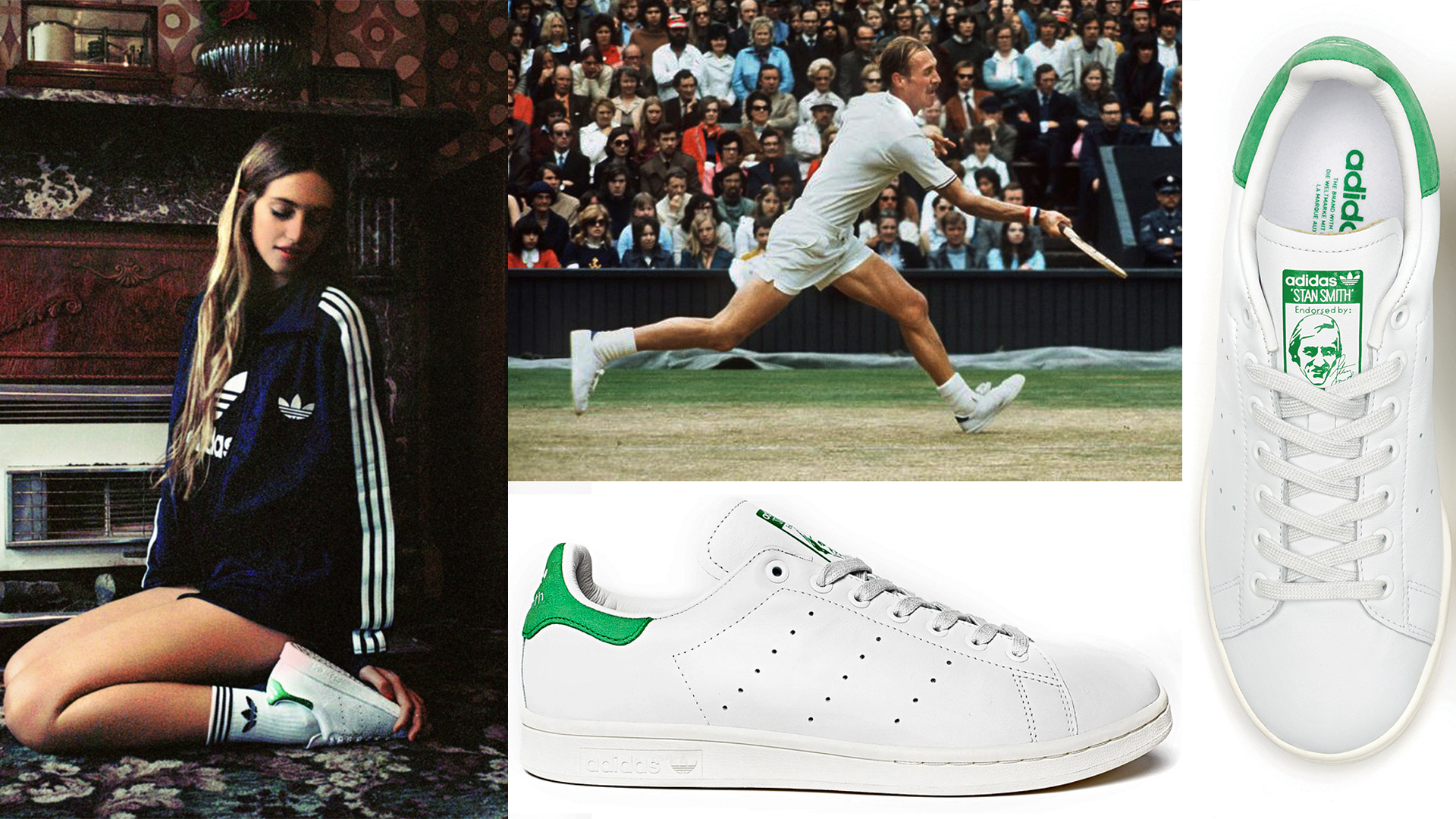 The adidas Stan Smith has always been a clean-cut classic, but it hasn’t always had the iconic name. In fact, back when the shoe first hit the scene in 1963, it was named for French tennis player Robert Haillet. But it didn’t make many waves. Then in 1971, American Stan Smith became World No. 1, and adidas tapped him to endorse their signature tennis shoe. From there, they simply added a portrait of Smith to the tongue and the iconic green and white trainer assumed the classic form we know today.

With its crisp white styling and low-key cool, the renamed Stan Smith quickly made waves off the court as well as on it. Thanks to its elegance and versatility, which means it pairs equally well with ripped jeans or a designer tux, the shoe has been adopted over the decades by a host of celebrities from Bowie to Blur. On its re-release in 2014, the Stan took on a whole new lease of life as it was embraced by a fashion world who loved its clean lines and versatility. It was crowned FNAA shoe of the year (an award that’s also been won by Kanye’s Yeezy and Rihanna’s Creeper) and it’s since turned up on the feet of everyone from Alexander Wang to Gisele to Pharrell Williams. This is one icon that still goes with absolutely everything. 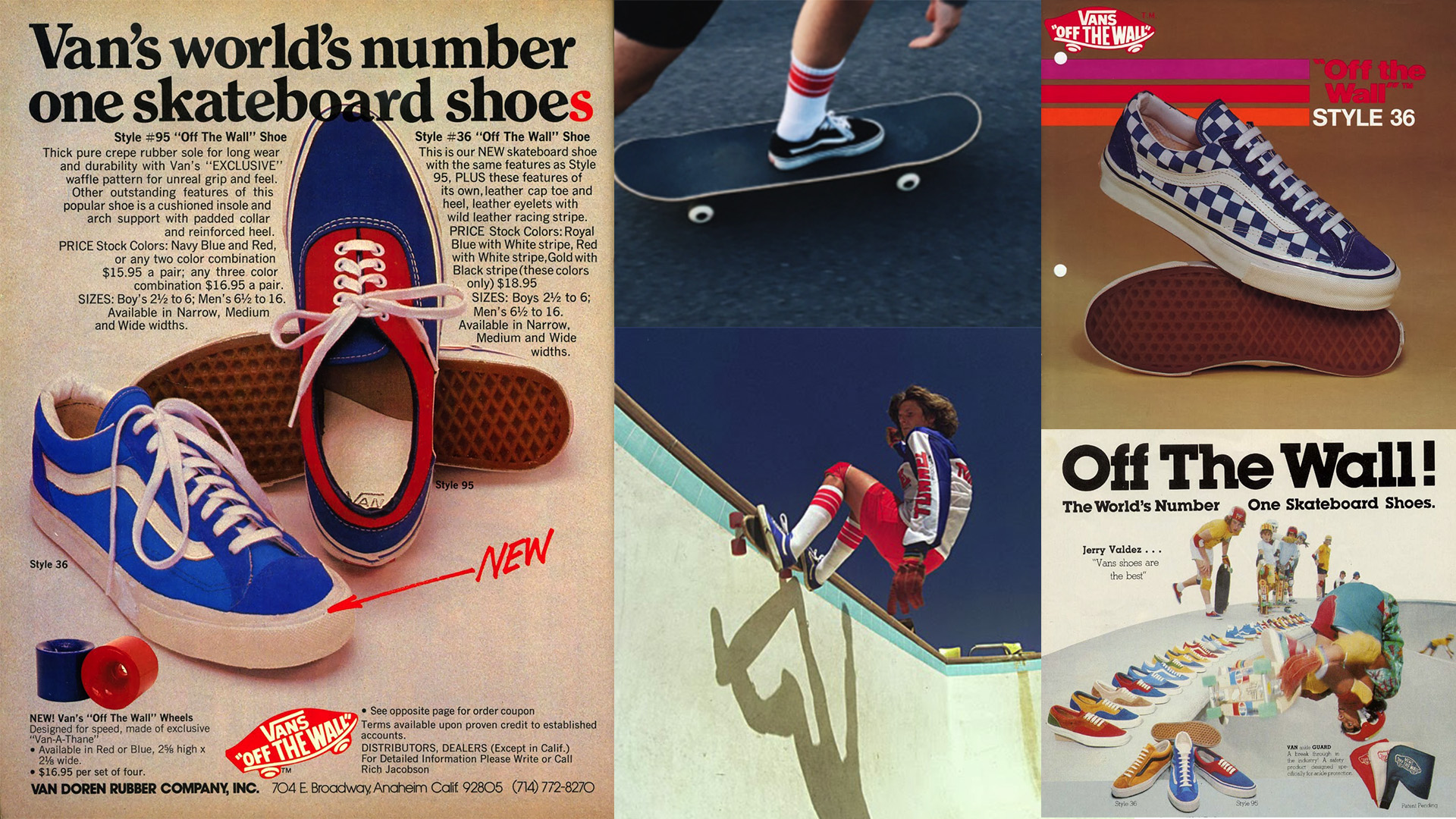 When it comes to skate shoes, there’s one off the wall icon that soars above all the rest – the Vans Old Skool. At the start of the ‘70s, the lightweight Vans Authentic had already become the unofficial uniform of the new breed of skate stars who were revolutionising the sport. But as the tricks got more spectacular, the shoes needed to stand up to more punishment. To make his trainers more durable, Vans founder Paul Van Doren added leather paneling to the already classic diamond rubber sole and came up with the design originally known as “Style 36”. The shoe was brilliantly designed, but it still lacked a certain special…something.

While doodling one day, Van Doren came up with the distinctive logo line he christened the “Jazz Stripe”. Finally, Vans had a symbol that could compete with Nike and adidas. In 1978, the company debuted the second trainer to feature the new logo, the even tougher Vans Sk8-Hi – which introduced a reinforced ankle to make even sicker skate moves possible. The Old Skool and its variants went on to become the signature trainer of ‘90s punk scene and an essential accessory for anyone looking for some cool by association. In 2016, the Old Skool has become the street shoe to be seen in and was the footwear of choice for anyone who was anyone at New York Fashion Week. This year, celebrities from Gigi Hadid to Frank Ocean to Kanye West have all been seen rocking the side stripe. For rebellious but classic style, the Old Skool is an icon that refuses to grow up.

Puma Suede – A Rebel with Claws 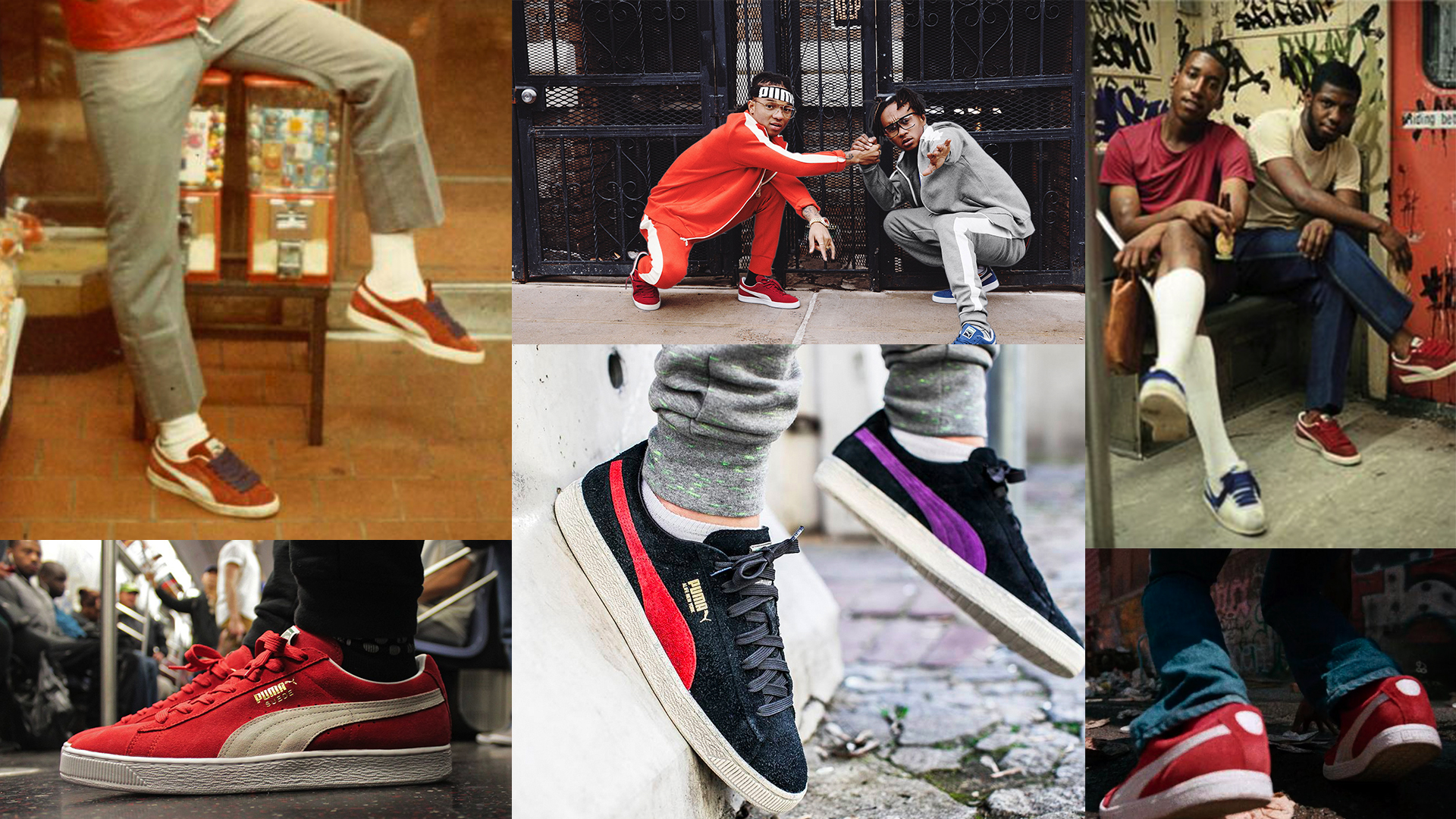 The Puma Suede was introduced in 1968, and became instantly famous when it appeared on the Olympic podium next to barefoot medalists Tommie Smith and John Carlos as they flashed the black power salute. But it was in the next decade that the shoe really came into its own. As rap music exploded in the ‘80s, the Puma Suede’s smooth style, with its subtle, solid coloured material and iconic formstrip, made it a favourite of hip-hop stars and fashion-conscious sneakerheads alike. Iconic rapper and DJ Grandmaster Flash was so obsessed with keeping his Suedes box fresh that he carried a toothbrush in his back pocket to give his shoes some extra sparkle whenever they needed it.

The Suede also turned out to be ideally suited to breakdancing, and became the unofficial uniform of infamous dance crews like the Rock Steady Crew and the New York City Breakers. Its fame then spread around the world with the release of the documentary Beat Street in 1984, as the ground-breaking film lifted the lid on b-boy culture and affirmed the Suede’s place as a true street legend. In the decades since, the Puma Suede has come to represent an undefinable air of NYC attitude. For a certain type of city slicker, this icon easily lives up to its original billing as “the essence of cool”.

These iconic trainers defined the 1970s. But like all true icons, they’ve been redefined, reinvented, and rediscovered by countless new generations. Become a part of their continuing story. Be Iconic Everyday

THE LATEST RANGE OF ICONS IS NOW AVAILABLE ONLINE & IN SELECT STORES.