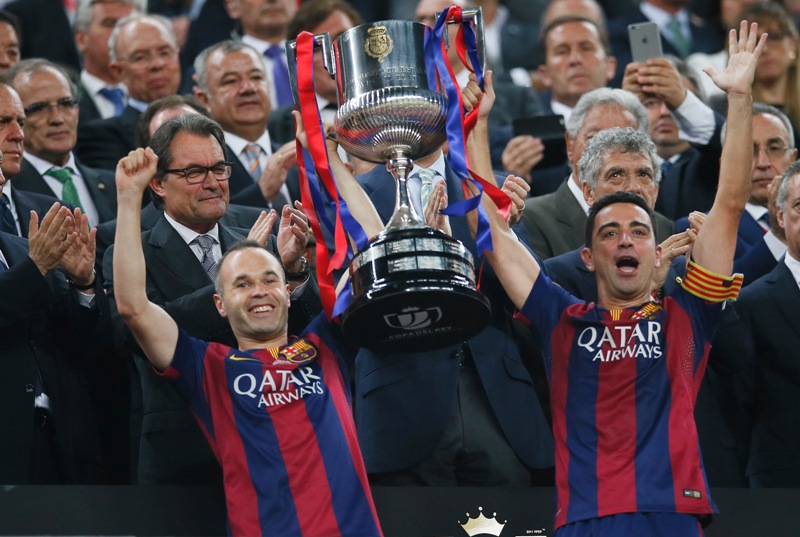 How far can Iniesta go in remarkable Barcelona career?

Andres Iniesta reached a landmark 400 La Liga games for Barcelona last month but his side will need something extremely special if he’s to add further Champions League appearances this season.

Barcelona trail PSG 4-0 after the first leg and have it all to do if they’re to overturn that massive deficit, but they did beat Celta Vigo 5-0 on Saturday.

Iniesta has been a stalwart of the Barcelona midfield for 15 years following his debut against Mallorca back in 2002 under the stewardship of Louis Van Gaal.

Now at 32 years old, Iniesta has not been ever-present for Barcelona this year but he’s got plenty of fond memories to get him through his remaining early starts and intensive training sessions.

Iniesta wasn’t quite 21 when Barcelona sealed the 2004-05 La Liga title but it was the Spaniard’s breakthrough year as he made 37 league appearances.

The midfielder was lining up alongside fellow Spaniards Carles Puyol, Xaxi and Victor Valdes for much of the campaign.

A year later and Iniesta was tasting European success for the first time as Barcelona won the La Liga and UEFA Champions League double in the 2005-06 season.

After five wins and a draw in the group stage, Barcelona saw off Chelsea in the last 16 before downing Benfica and AC Milan on their way to the final.

And two goals in the final 14 minutes was enough to overcome Arsenal in the showpiece itself, with Eto’o and Juliano Belletti breaking Gunners fans’ hearts and earning Iniesta the first of his four European titles.

And with the scintillating Lionel Messi in arguably the form of his career, Iniesta and Barcelona completed an incredible treble in the 2008-09 season.

Iniesta was instrumental in defeating Manchester United in the Champions League final with a BBC sport report calling him “arguably the game’s most influential performer”.

The La Liga title and Copa del Rey trophy were also lifted in 2009 by Iniesta and he’s currently the Barcelona player, alongside Messi, with the most trophies to his name with 29.

The treble was repeated in 2014-15 but as boss Luis Enrique gets set to depart at the end of the season, and Iniesta’s contract up in 2018, it’s uncertain if he’ll reach 400 La Liga appearances.