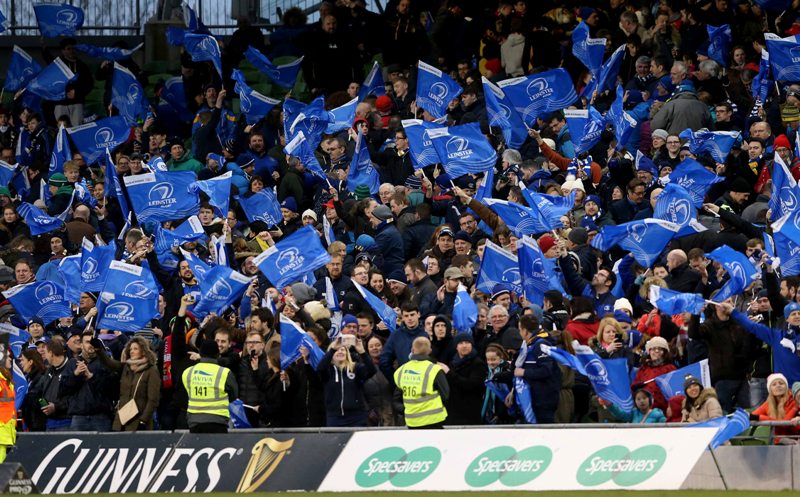 Leinster moved to the top of the Guinness Pro12 over the weekend after beating Munster 16-13 in front of over 40,000 people at the Aviva Stadium.

The biggest league attendance of the season to date, the 43,108 fans fully justified Leinster’s decision to move the derby game away from the RDS Arena.

Nail-biting drama at the Aviva

While the 16-13 victory saw just a single try apiece, there was certainly no lack of drama and tension in a gripping game which went right down to the wire.

Munster could have snatched a draw, a fair result according to Jonathan Sexton when he spoke to the media later, after securing a penalty almost in front of the post in the dying seconds.

But a quick tap from Dave Kilcoyne saw the Limerick side go all out for victory but a knock-on a few phases later meant they left with just a losing bonus point.

Sexton highlighted his good form by scoring all 16 points, including a try, while Munster’s Johnny Holland had scored all 13 of his side’s points before he was replaced by Ian Keatley just before the hour mark.

Injury-hit Connacht were unable to recover after slipping to 18-3 down against play-off chasers Ulster but showed their strength in depth with performances from academy product Peter Robb and full debutant Shane O’Leary.

The 18-10 defeat means Connacht are without a win in Belfast since 1960 and have been knocked off the top of the Pro12 table on points difference.

Rory Best and Craig Gilroy scored the vital tries for Ulster either side of half-time with eight points from the boot of Paddy Jackson.

The task doesn’t get any easier for Connacht with a further test of their squad coming up against play-off chasing Munster and Glasgow Warriors in the coming weeks.

This weekend however their attention turns to Europe and a trip to FC Grenoble in the quarter-final of the European Challenge Cup.

They are the only Irish team still in either European competition meaning Munster will have a full two weeks to prepare for their Guinness Pro12 meeting on April 16.

After a disappointing European campaign, as things stand, all four Irish provinces would qualify for the European Champions Cup next season.

Leinster, Connacht, Munster and Ulster occupy four of the top-six places in the Pro12 while Scarlets, who lost to Cardiff Blues 28-22 on Saturday, and reigning champions Glasgow Warriors also currently set to qualify.