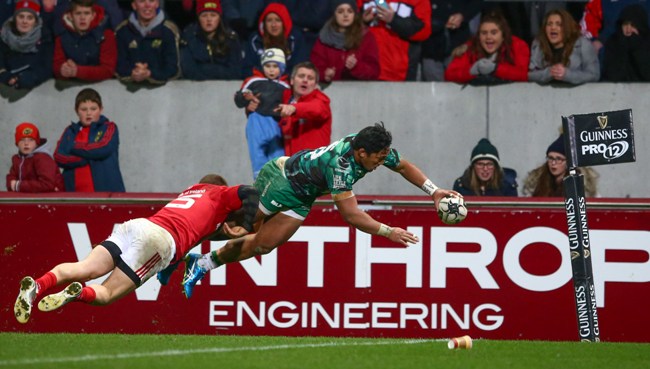 Irish success in the Guinness PRO12 since the league’s inception in 2001 has been so great, that it can perhaps be taken for granted.

Eight of the past 12 PRO12 finalists have been Irish provinces, but even by those standards this year has been a particularly prosperous season.

All four Irish sides are in the top six – with Champions Cup rugby in every corner of Ireland a very conceivable possibility – and each team also has a realistic hope of qualifying for the knockout stages.

Traditionally the outsiders of Irish provincial rugby, Pat Lam has marshalled Connacht’s ascent to the PRO12 summit in fearless fashion. Not only do they have the same points tally as league leaders Leinster, but champagne rugby has been flowing on the west coast.

Lam’s men crashed out of the European Challenge Cup on Saturday to a late Jonathan Wisniewski drop goal at Grenoble’s Stade des Alpes, but there was enough in that loss to suggest Connacht’s league challenge is unlikely to fade away.

Matt Healy – one of four uncapped players called up to this week’s one-day Ireland training camp – was in superb touch, Niyi Adeolokun crossed twice and it took a remarkable Grenoble comeback, masterminded by former Connachtman  Bernard Jackman, to stop them.

Connacht have an eight-point buffer to Saturday’s opponents Munster, who sit in fifth, and Lam’s men have won two of their last three fixtures against their interprovincial rivals, but have never completed a league double over the Men in Red.

While Connacht – led by the indomitable John Muldoon – are strong favourites to secure a play-off spot, if they fail to shake off the stupor of their European loss and succumb to Munster, they will find themselves in the thick of the scrap once more.

Lam can probably count on at least four points against Benetton Treviso at the Stadio Monigo, but a resurgent Glasgow Warriors at the Sportsground is an entirely different prospect altogether.

Leinster’s hunt for a record-breaking fifth PRO12 title was stunted by successive losses to a Glasgow and Connacht, but they righted the ship with a stubborn 16-13 victory over Munster at the Aviva Stadium last time out.

Leo Cullen had slowly begun to elicit the best from his men and though they sit top, their position would be altogether more comfortable had they beaten either Glasgow or Connacht.

Leinster could do both themselves and their provincial rivals a serious boost by doing what they have not failed to do since September 2011 and defeat Scottish opposition at the RDS Arena – Edinburgh are nipping at the heels of Munster and Ulster, but Cullen’s side will be firm favourites to defeat the Scotsmen.

Like Healy, Leinster’s young centre Garry Ringrose has been called up to Ireland’s brief training camp and if he continues to perform for Cullen, along with Jonathan Sexton – who kicked all of Leinster’s points at the Aviva – and other established internationals Jack McGrath, Jamie Heaslip and Dave Kearney, they are odds on for a home semi-final.

Of all four provinces, Munster have the toughest battle if they are to make it to the play-offs. They sit sixth, and though only two points behind Ulster, their run-in presents the most challenges.

Connacht have beaten them once already this season and are chasing play-off rugby as well as a home semi-final, Scarlets are also chasing the top four and their clash with Edinburgh could become a straight battle for the final Champions Cup spot.

Danny Wilson’s Cardiff Blues put Munster to the sword in their last outing which will leave confidence somewhat dampened going into the inter-pro game with Connacht, but Foley does have the considerable advantage of not having to leave Ireland again before season’s end.

Edinburgh arrive at Irish Independent Park while the Scarlets have a final day battle at Thomond Park’s cauldron to look forward to.

CJ Stander has talked of a ‘cup final’ mentality heading into their final three games and given their run-in, they will need just that if they want knockout Pro12 rugby for the third consecutive season.

Les Kiss’ side welcomed back Rory Best, Jared Payne and Andrew Trimble for Connacht’s visit to the Kingspan Stadium and the Ireland internationals made a considerable impact, helping them to an 18-10 victory.

Their league double over Connacht demonstrated the potential at Kiss’ disposal, but the Ulsterman have failed to fire as regularly as they would have liked this season and are three points adrift of fourth-placed Scarlets.

Kiss will no doubt be confident of defeating Zebre at the Stadio Sergio Lanfranchi, but with things so tight at the top, the manner in which they do so could be critical – anything less than a bonus point will probably be deemed a failure.

They back up their trip to Italy by facing Leinster at the Kingspan Stadium in what is likely to be a fiery inter-pro derby as both sides look to press their play-off claims.

Ulster have been a play-off mainstay since 2013 and still have a good chance, but like Munster, they will need to approach every game as if it is their last if they want to make the cut in 2016.