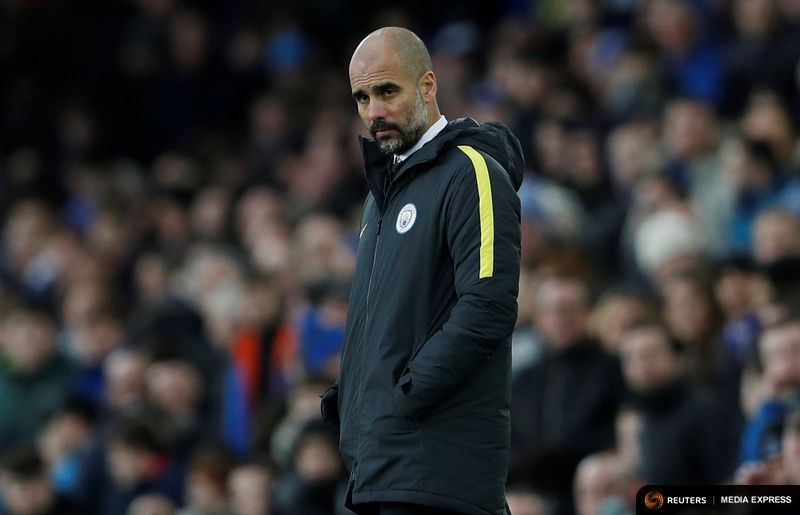 It may be all doom and gloom at Manchester City after their crushing 4-0 defeat at Everton, but Gabriel Jesus has timed his arrival to perfection – with the club desperately in need of a pick-me-up ahead of the second half of the campaign, starting with Saturday’s mammoth clash with Tottenham.

Pep Guardiola claimed City’s title challenge is over following their fourth defeat in eight Premier League games and the table suggests he has every reason to be worried about their prospects of a top-four finish too after they dropped to fifth.

Chelsea put the Diego Costa scenario behind them with a comfortable win at Leicester City, while Tottenham, Liverpool, Arsenal and Manchester United are all in strong form.

But in Jesus, a summer signing who has just arrived ahead of the second half of the season and who could make his debut against Spurs, City have a player who could help them get back on track and lift the dreary mood at the Etihad Stadium.

The Brazilian media have already fallen head-over-heels for Jesus after his excellent start to international football – leading them to compare the 19-year-old with global superstar Neymar.

Jesus, a tricky winger with a big appetite for goals, generally operates on the left wing and cuts in – much like his international teammate – but he is equally adept as a striker, and he has flourished there for Brazil.

Ten goals in 16 games for Palmeiras last season saw him named as ‘Best Newcomer in the Brazilian League’ and it is easy to forget how rapid his rise has been. Just two years ago, Jesus had not made his senior debut.

Yet, many of Europe’s big clubs were banging down Palmeiras’ door in the summer, with Barcelona and City at the front of the queue, and it was the influence of Guardiola who tempted him to east Manchester.

Since then, it has become apparent City have got a star. Just a couple of weeks later he made his international debut in the Olympic Games – helping Brazil to an historic gold medal. So far he has four goals in six games.

Where will he fit in at City?

As previously stated, Jesus is most comfortable on the left wing – a position often taken by Raheem Sterling so far this season.

But Sterling, like other City wide attackers such as Leroy Sane and Nolito, have failed to impress of late – leaving Kevin de Bruyne as the only consistent City playmaker, and a possible space for Jesus.

Pep needs Gabriel Jesus to live up to his surname.

But can the teenager become the leader of the attack? Sergio Aguero may still be scoring goals, with 18 in 23 appearances in all competitions this season, but there seems to be an uneasy relationship between him and the boss.

Guardiola wants his strikers to press harder, drop deeper and become more in-sync with his midfielders – something Aguero has struggled to do.

Jesus would clearly fit that bill and, although he may not yet have the finishing ability of his fellow South American, he could, in time, take over in attack and become Guardiola’s leading man.

After watching his side limply probing Everton’s backline before being caught on the counter-attack time and time again, Guardiola must be tempted to chuck his new expensive toy straight into the team.

Gabriel Jesus to score a toe-poke on his City debut. You heard it here first.

Spurs are the Premier League’s in-form side and now look like a genuine threat to leaders Chelsea, with six consecutive victories seeing them surge up the table, making Saturday’s contest vital.

Mauricio Pochettino’s side look back to their best, with leading lights Harry Kane and Dele Alli in blistering form, and their notoriously stingy defence living up to its reputation.

There is no doubt that in a low period of doom and gloom, Jesus will lift the mood at the Etihad and that could rub off on his floundering teammates.

Guardiola has already said he wants to ease him into the English football, but with City’s Premier League hopes hanging by a thread and a top-four place in doubt – can he really risk not chucking Jesus straight in?

It could be the decision which revitalises City’s season.