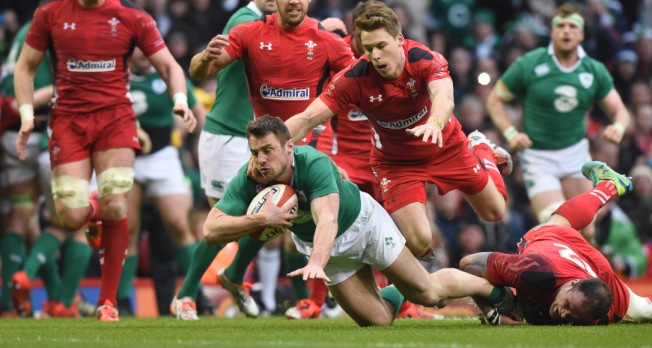 AHEAD OF IRELAND’S CLASH WITH WALES THIS WEEKEND, WE LOOK AT THOSE WHO WE THINK WILL STAND UP AND BE COUNTED FOR THE MEN IN GREEN WHEN THE WORLD CUP GETS UNDERWAY NEXT MONTH. TODAY IT IS THE TURN OF ULSTER’S TOMMY BOWE. AND WHILE YOU’RE WITH US, MAKE SURE YOU CHECK OUT OUR ONLINE STORE BY CLICKING HERE TO ENSURE YOU LOOK THE PART WHEN THE TOURNAMENT KICKS OFF.

Though he will be absent at the Aviva Stadium on Saturday, Tommy Bowe’s vast experience will surely see him named in Joe Schmidt’s World Cup squad.

The 31-year-old wing has won 62 Test caps, running in 28 tries, while he has also made five starts for the British & Irish Lions.

But Bowe will still feel like he has something to prove when he steps out in Ulster colours for tonight’s pre-season friendly against Edinburgh, rather than the emerald green tomorrow.

He has played 60 minutes of rugby across three warm-up matches and, perhaps, Schmidt believes he will get more game time with Ulster than Ireland.

There will be a nervous wait before Schmidt names his squad on Sunday, but Bowe must have faith in his own ability.

He was part of the Ireland side that retained their Six Nations title in the spring and played a key part in the autumn international victories against southern hemisphere big hitters South Africa and Australia.

Bowe also has the experience of featuring at a World Cup. He touched down twice in Ireland’s opening game of the 2011 showpiece, though they were knocked out by Wales in the last-eight.

So it’s all eyes on Ulster and Ireland this weekend and if Bowe’s phone rings on Sunday then there is no doubt he has what it takes to shine on the world stage.