Guinness PRO12 leaders Munster head to the Liberty Stadium on Saturday for a titanic tussle with second-placed Ospreys.

Victory would go a long way to securing a play-off spot for Rassie Erasmus’s side.

And here, we take a look back at five of their most memorable recent Pro12 triumphs on the road for inspiration.

In their first away match since the sudden passing of head coach Anthony Foley, a 75th-minute drop goal from Rory Scannell completed a thrilling comeback against Ulster.

The Irish province, then-league leaders, held a 14-0 advantage but tries from Scannell and Jaco Taute turned things around for the Munstermen.

Since that victory, Munster have only lost once in all competitions – a narrow defeat to Leicester Tigers in Europe – and have climbed to the top of the table. 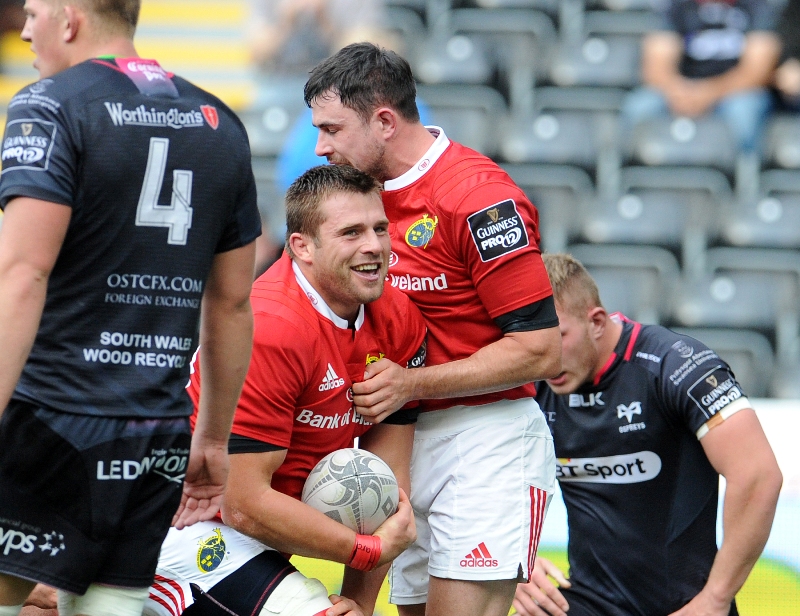 Another emotional occasion 13 months earlier was preceded with tributes to former Ospreys No.6 Jerry Collins, who died in a car crash in France.

Munster had not read the script however, and snatched victory from the jaws of defeat when a nerveless Ian Keatley converted CJ Stander’s late try.

In front of almost 44,000 fans at the Aviva Stadium, Munster had to produce a dogged second-half display to seal a first win in Dublin since 2008.

Ian Keatley amassed 21 points against the reigning champions, and Munster – who had four players sent to the sin bin in the second period – held firm.

A seven-try display of ruthlessness in Meggetland should have secured Munster a home semi-final, with JJ Hanrahan also faultless from the tee.

However, Munster lost at home to Ulster the following weekend to finish third in the 2013/14 regular season standings, and subsequently lost their semi-final at 16-15 to the Glasgow Warriors at Scotstoun.

Trailing 23-16 at the end of 80 minutes, Munster were facing a miserable return home from Stradey Park.

But Paul Warwick went over in the final seconds of normal time and then kicked a penalty from inside his own half during a mammoth nine minutes of second-half stoppage time to nab a pulsating win.