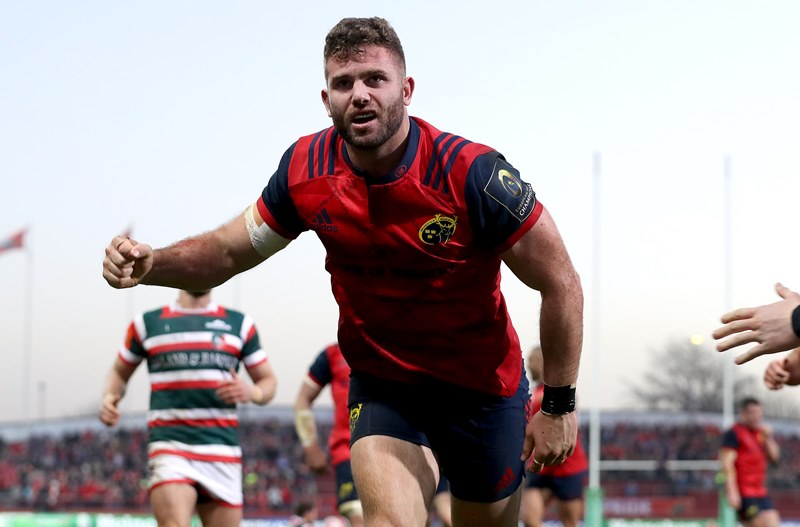 Munster play host to Leicester Tigers on Saturday looking to take a big step towards qualification for the Champions Cup knockout stages.

With a draw at Castres and a win over Racing 92, Munster currently sit second in a very tight Pool 4, level on points with the Tigers.

And as two of the giants of European rugby prepare to face off, we look back at some of the great games the two have played out.

Where else could we start but last year’s meeting at Thomond Park – and what a performance it was!

Dominant from start to finish, Munster scored 19 points in each half, with Simon Zebo’s try setting them on their way to victory.

Tyler Bleyendaal chipped in with 14 points from the boot in the first half, eventually finishing with 18.

In the second half it was the Jaco Taute show, the South African scoring two tries and being brought down off the ball to earn his team a penalty try and an all-important bonus point.

That was enough to send Munster on their way to the top of the group and a quarter-final spot. In the end they fell at the penultimate hurdle, losing to eventual champions Saracens in the last four.

Not the most pleasant of memories for Munster fans – this was the last-ever game at the old Thomond Park before its redevelopment.

Having already booked their place in the last eight, Munster needed to avoid defeat to secure top spot.

Instead it was Leicester who stopped Munster’s perfect record at Thomond Park at 26 wins in a row thanks to a narrow victory.

Geordan Murphy and Ollie Smith scored a try in each half for the visitors, with Ronan O’Gara managing just two penalties for Munster.

A few months earlier, O’Gara had been the hero for Munster as they secured one of the all-time great wins at Welford Road.

In a really tight encounter, O’Gara backed up some strong feelings he had revealed about English rugby during the week with a memorable performance.

Munster dominated the first half, Donncha O’Callaghan scoring early and David Wallace crossing on the stroke of half-time for a 15-6 lead.

However, Leicester came back, and after a penalty try and an Andy Goode penalty, it was they who led with a minute remaining.

It was then that O’Gara stepped up, in the pouring rain and virtually on halfway. He held his nerve, split the uprights, and sent the Red Army home in raptures.

Another great win at Welford Road, this success in quarter-finals in 2003 underlined Munster’s status as one of the giants of the European game.

After qualifying for the quarter-finals with the miracle game against Gloucester, Munster faced a trip to England to take on Leicester.

Still smarting from defeat the previous year (we’ll get to it), they produced a great second-half performance to end Leicester’s hopes of a third straight title.

Leading 3-0 at the end of a tight first half, Munster extended their lead through the boot of O’Gara.

Leicester responded with a converted try from Steve Booth to take the lead for the first time, but seven minutes later, O’Gara went over for a Munster try.

He was joined by half-back partner Peter Stringer five minutes from time as Munster wrapped up a famous victory.

It’s been 15 years but still the ‘Hand of Back’ rankles with supporters. Whether you call it professional, gamesmanship or outright cheating, that little flick on Peter Stringer will never be forgotten.

In their second Heineken Cup final, Munster looked ready to conquer Europe but in the end they had to settle for the runners-up medals for the second time in three years.

Murphy, again, and Austin Healey went over for Leicester, while Tim Stimpson contributed five points from the boot.

O’Gara scored a trio of penalties for Munster, but it all came down to that late scrum, Munster right on the Leicester line. Stringer was feeding, with referee Joel Jutge on the opposite side of the scrum. Back gambled, tapped the ball out of the scrum-half’s hands and Leicester got one against the head and cleared.

Munster have long since earned their revenge, but it remains one of the more infamous moments in the history of European rugby.