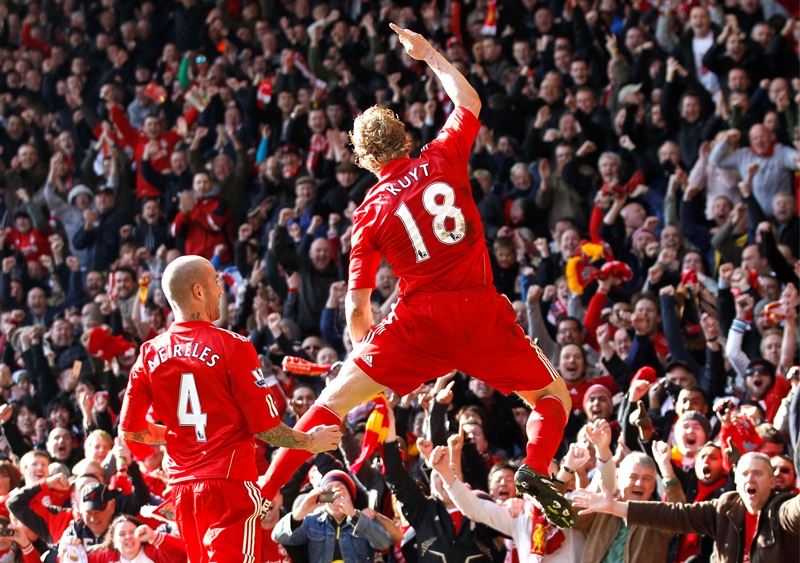 Five of the best: Liverpool v Manchester United at Anfield

In case you hadn’t heard, there’s a bit of a big one this Saturday lunchtime.

At 12:30pm, Liverpool roll out the red carpet for bitter rivals Manchester United, with English football’s two most successful clubs facing off in what is undoubtedly one of the most famous fixtures in the game.

As these two north west powerhouses prepare to lock horns once again, we’ve taken a look back at five of the most memorable Liverpool and United clashes to take place at Anfield in the Premier League.

Kicking off our rundown is one of the great Premier League comebacks as Liverpool overturned a 3-0 deficit to earn a point against the Red Devils in 1994.

Steve Bruce, Ryan Giggs and Denis Irwin had put United supporters in dreamland but before the first half was over, Nigel Clough had struck twice to reduce the deficit to a single goal.

Then, with 11 minutes to go, Stig Inge Bjørnebye whipped a sublime cross into the area where it was headed into the net by the burly Neil Ruddock, who almost looked totally bemused by the manner of his equaliser as he was swamped by a delirious Jamie Redknapp.

Paul Ince’s relationship with his former United boss Sir Alex Ferguson had long soured before his old club rocked up at Anfield late in the 1998-99 season.

The self-styled ‘Guv’nor’ – or ‘big-time Charlie’, if you prescribe to Ferguson’s description of the then-England midfielder – slid in to score a dramatic 88th-minute equaliser to earn Liverpool a point, with Ince endearing himself to the Kop faithful by celebrating wildly after getting one over on his former employers.

United and Ferguson would go on to have the last laugh however as they pipped Arsenal to the title before going on to record an historic treble.

So often a key man for Liverpool on the biggest occasions, Kop hero Jamie Carragher probably doesn’t own the DVD of this one.

With Jamie Redknapp having already notched an own goal, dyed-in-the-wool defender Carragher thought he had better go one better than his teammate and a catastrophic individual performance saw him twice turn the ball into his own net to leave his team trailing 3-1 at half-time.

Liverpool did reduce the deficit through Patrick Berger but even an Andy Cole red card from violent conduct wasn’t enough to spare Carragher’s blushes as United took all three points.

The list of players that have scored the winning goal in clashes between Liverpool and United reads like a who’s who of Premier League football.

Sometimes, star turns come from the unlikeliest of sources and that proved to be the case in 2007 when, a minute into added time, the Red Devils’ Cristiano Ronaldo chanced his luck from a free-kick.

With Louis Saha unsighting him, Liverpool stopper Pepe Reina couldn’t help but fumble the Portuguese superstar’s effort and John O’Shea was the man in the right place at the right time, the Irish defender slamming high into the net to snatch a memorable victory for the visitors.

Despite the quality both teams possess year after year, it’s worth remembering that they really don’t get on and their meeting at Anfield in 2011 was as bad-tempered as they come.

Whether it’s Jamie Carragher’s shin-high challenge on Nani that reduced the United winger to tears or Rafael’s ferociously wild lunge on Liverpool midfielder Lucas – both players bizarrely escaped red cards – there was little love lost on a fiery day on Merseyside.

It all detracts somewhat from Dirk Kuyt becoming the first Liverpool player to hit a hat-trick against United in the league since Peter Beardsley in 1990, even if Luis Suarez was the real star of the show for the Reds on the day.

THE LATEST RANGE OF LIVERPOOL PREMIER LEAGUE JERSEYS ARE AVAILABLE TO PURCHASE IN STORE AND ONLINE NOW.