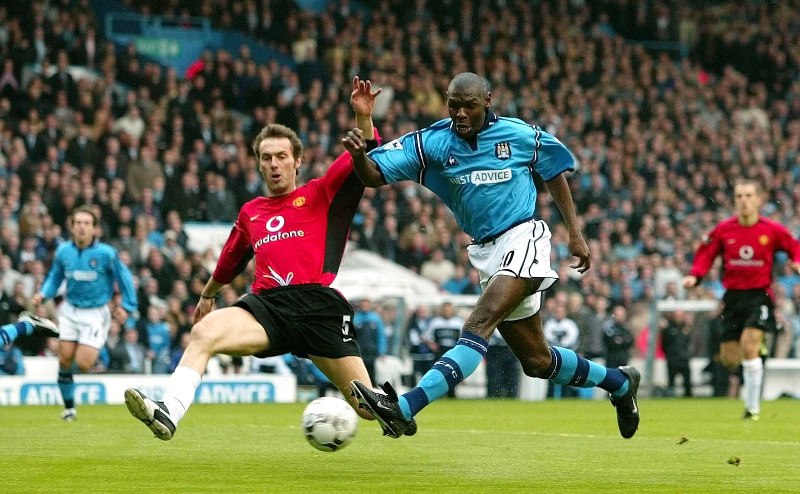 Manchester City and Manchester United lock horns again at the Etihad Stadium on Saturday, with Pep Guardiola’s side able to clinch the Premier League title with victory.

The stakes are always sky high when the city’s finest go head-to-head – no more so than this weekend – so ahead of what could be the Citizens’ crowning moment, we’ve taken a look back at some of our favourite Manchester derbies from the Premier League era.

“Feed the Goat and he will score,” goes the famous chant and City were able to dine out on their first derby victory in 13 years thanks to Shaun Goater’s 99th and 100th goals for the club.

The win also ensured that the hosts triumphed in the final Manchester derby to be played at Maine Road, Nicolas Anelka getting the ball rolling as he gleefully swept home after Fabien Barthez had spilled a tame Goater effort with five minutes gone.

Ole Gunnar Solskjaer fired in from Ryan Giggs’ low cross shortly afterwards but that was as good as it got for United as a Goater-inspired City roared on from there.

Gary Neville’s error allowed the Bermudan to waltz into the box and slot home before the City frontman brought up his ton with an impudent chip over a scrambling Barthez.

Sir Alex Ferguson labelled it potentially “the best derby of all time” as a catalogue of errors contributed to a pulsating clash at Old Trafford, settled in dramatic style by Michael Owen.

Owen won the Ballon d’Or at Liverpool but emphatically endeared himself to the United faithful by toe-poking home from Ryan Giggs’ expertly-placed pass with 96 minutes on the clock.

Before that, Wayne Rooney’s second-minute opener had lit the blue touch paper before 90 minutes of regulation time were rounded off by City’s Craig Bellamy outpacing Rio Ferdinand and befuddling Ben Foster to tie things up at 3-3.

United’s worst home defeat since 1955 and the first time they had conceded six goals at home since 1930 – City mercilessly stuck the boot into their rivals at Old Trafford en route to clinching the 2011-12 Premier League title.

Three of City’s goals were scored in the 90th minute and after, Jonny Evans earlier seeing red for hauling down Mario Balotelli, but Roberto Mancini’s visitors were a cut above throughout, with Balotelli and Edin Dzeko both ending the day with braces.

Balotelli’s side-footed effort was the cue for the Italian to reveal his infamous ‘Why Always Me?’ t-shirt while David Silva’s sumptuous volleyed pass, which set up Dzeko’s second and City’s sixth, is another iconic moment from a remarkable derby day.

Robin van Persie was a revelation in his debut season with United and the injury-time winner that dispatched reigning champions City at the Etihad Stadium was one of his stand-out moments.

City looked dead and buried after Wayne Rooney’s early double but from nowhere, they fought back to level terms, Yaya Toure reducing the deficit before Pablo Zabaleta levelled with four minutes to go.

Van Persie provided the sting in the tail, however, his last-gasp free-kick deflecting in to spark wild celebrations from the United players.

City goalie Joe Hart kept a furious pitch invader at bay while Rio Ferdinand was struck by a coin thrown from the stands but United ultimately cashed in, going on to claim a 20th league title.