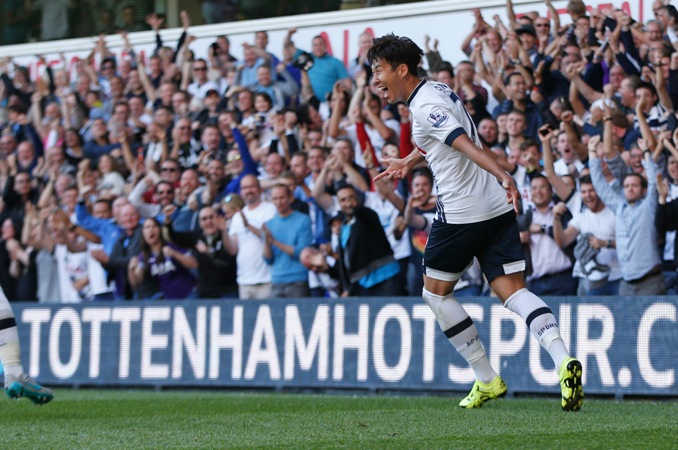 Unbeatable Manchester City prove they are, well, beatable, Riyad Mahrez just will not stop scoring and three expensive summer recruits found the net. Do you agree with our team of the week?

David De Gea
Boots: Adidas Ace 15
Made a magnificent save to deny Jose Fonte of Southampton, clawing the ball off the line having seemingly been beaten. The Spanish stopper did not know whether he was coming or going in the summer but with the transfer window closed and a new contract signed, De Gea is showing he is prepared to knuckle down at Old Trafford.

Branislav Ivanovic
Boots: Nike Tiempo Legend V
Despite being lambasted for his early-season performances, Ivanovic was thrown the captain’s armband with John Terry named among the substitutes, and the Serbia defender responded with aplomb. Nine-man Arsenal were stifled and the Blues could be up-and-running.

Winston Reid
Boots: Adidas X 15
“Parking the bus with the handbrake off” has been the mantra West manager Slaven Billic has adopted to see West Ham win at Arsenal, Liverpool and now Manchester City. Reid nullified the threat of Sergio Aguero, allowing his team-mates at the top end of the pitch freedom to win the points.

Russell Martin
Boots: Nike Tiempo Legend V
Norwich’s free-scoring centre-back was at it again at Anfield to earn the Canaries a point. His performance was all the more remarkable when you consider he embarked on a four-hour drive from Liverpool to Norwich at midnight to witness the birth on his son at 9am. Then boarded a plan at 12pm ready for the 4pm kick-off in Merseyside.

Sylvain Distin
Boots: Nike Tiempo Legend V
The 37-year-old rolled back the years on his debut to help Bournemouth achieve a clean sheet against sorry Sunderland. The Black Cats did not manage a single shot on target in the second half as another of the Premier League’s seasoned campaigners, Jermain Defoe, endured a frustrating time.

Matt Ritchie
Boots: Nike Hypervenom Phantom II
A goal of the season contender from the Scotland winger helped Bournemouth to their first home win in the Premier League. Callum Wilson has been bagging the headlines for his fine start to the season in front of goal but it was Ritchie who inspired the Cherries on Saturday.

Son Heung-Min
Boots: Adidas X 15
Son really was shining at White Hart Lane on Sunday, capping an explosive display with the winning goal against Everton. Tottenham have been crying out for a cutting edge in the final third to help out Harry Kane and, in the South Korea superstar, they may just have found it.

Kevin De Bruyne
Boots: Nike Mercurial Superfly
When you pay a club record fee of £55million you expect an instant return, and though Manchester City lost for the first time this season the performance of De Bruyne was a huge positive. The Belgium international was positive throughout, hell-bent on trying to rescue a point and scored a fine goal from 25 yards.

Riyad Mahrez
Boots: Nike Hypervenom Phantom II
Omnipresent in our team of the week, Mahrez inspired another brilliant Leicester comeback to earn a point at Stoke. Having tormented Aston Villa seven days earlier as they surrendered a two-goal lead, the Potters did the same. Mahrez started the comeback with a penalty then played in Jamie Vardy for the equaliser.

Anthony Martial
Boots: Nike Mercurial Superfly
The French teenager looks the real deal. Though Manchester United manager Louis van Gaal is keen to diffuse the hype surrounding 19-year-old Martial, that task is almost impossible after a second consecutive match-winning display. Two fine finishes against Southampton means he has scored with all three of his efforts on target in a United shirt.

Odion Ighalo
Boots: Nike Mercurial Superfly
The Nigeria international was free-scoring in the Championship last term and has been equally scintillating in the top-flight. Two goals at Newcastle took his tally to 20 in 24 league appearances in 2015 – more than any other player in England. If Quique Sanchez Flores’s team stay up then it will be because of Ighalo’s goals.