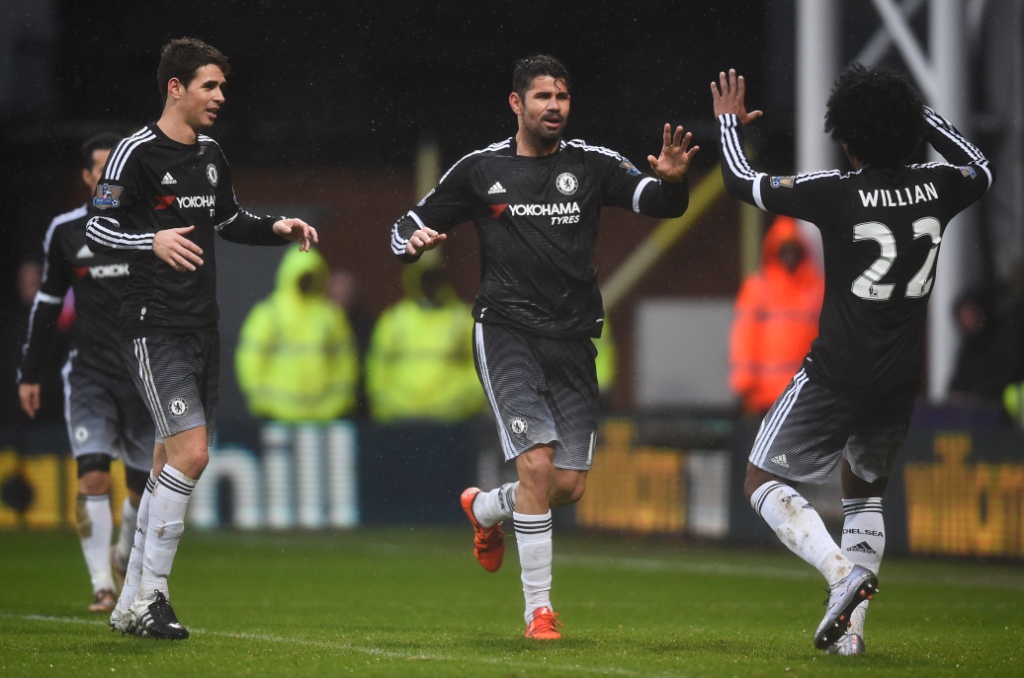 2015 may have ended in misery for champions Chelsea, but the new year already is looking up for the Blues after Guus Hiddink’s first victory in his second term as boss. Two of their goalscorers make our Fantasy XI this week, but can Chelsea kick on and surge up the Premier League table?

Petr Cech may have notched up six saves and yet another clean sheet for Arsenal against Newcastle, but it was Bournemouth’s Artur Boruc who put in the performance of the weekend between the sticks. The Polish stopper managed to foil surprise package Leicester again and again, and marshalled a depleted defence after skipper Simon Francis was sent off for a foul on Jamie Vardy – as well as saving the resulting penalty from the Premier League’s in-form man Riyad Mahrez.

After a disappointing 2014/15 season by his own standards, Bacary Sagna has already played just under 1000 more minutes of league football for Manchester City this season, and his third assist of the campaign helped his side down a spirited Watford. The France international’s sublime cross put it on a plate for Sergio Aguero to complete a dramatic turnaround for the Citizens and keep the pace with Arsenal at the Premier League summit.

Laurent Koscielny was the match-winner for Arsenal against Newcastle as the Gunners scraped through 1-0 to keep their place at the top of the table. Arsene Wenger’s side are starting to look less like nearly men and more like genuine title contenders and Koscielny’s graceful defending has been a big part of that. The Frenchman can chip in with the odd goal as well, as he showed on Saturday when he poked home from close range in the 72nd minute.

It was a weekend for defenders grabbing late winners with West Brom’s Jonny Evans earning the Baggies all three points in extra time against Stoke. As well as keeping the likes of Xherdan Shaqiri, Marko Arnautović and Bojan quiet all game, Evans scrambled the ball home for his first Premier League goal since Boxing Day 2012.

Wing-back Aaron Cresswell has impressed in recent weeks with a stunning strike against Aston Villa on Boxing Day, and continued his good run of form as West Ham shut down Jurgen Klopp’s Liverpool. Andy Carroll stole the headlines scoring against his former club, but alongside James Collins, Cresswell was excellent once more at the back as well as offering a threat further up the park.

Making it into the Fantasy XI for the second week running, Alli continues to go from strength to strength in the Premier League. The 19-year-old former MK Dons man has formed a link with Harry Kane that will delight Spurs and England fans alike, and Alli volleyed Tottenham level against Everton on Sunday. He has now scored or assisted six goals in his past seven Premier League appearances (three goals, three assists).

Chelsea’s Brazillian starlet has undeniably been yet to find his finest form in the first half of the Premier League season, but Oscar has now reached his longest ever run in the first team and marked it with a brilliant display at Crystal Palace. Arriving in the box to sweep home Chelsea’s first, Oscar was industrious and creative throughout and fed Willian to fire the Blues further ahead.

A second Fantasy XI appearance in three weeks for Alexander Tettey, whose moment of brilliance for Norwich was the highlight in an otherwise dour clash against Southampton. The Norwegian put on a free finishing lesson for Saints by cracking a perfect left-footed shot into the top corner from the edge of the area.

He may have copped some flack in recent weeks but Anthony Martial was worth every penny of the £36million Manchester United paid for him in the summer against Swansea. The French starlet was instrumental as Louis Van Gaal’s side ended a run of eight games without a victory, heading home in the first half before supplying Wayne Rooney with an inch-perfect cross with 13 minutes to go to settle the contest.

The veteran hitman was the match-winner for Sunderland against the out-of-sorts Aston Villa, as his two second-half goals handed them a 3-1 victory. Defoe has now scored eight Premier League goals against Aston Villa in his career but there can have been few as important as these two – which take his tally to seven goals in all competitions this season. When given the opportunity the Sunderland striker showed his ruthlessness in front of goal; with four shots in total the former England man hit the target with three of them and had a late goal disallowed for offside. Clinical finishing.

Costa’s strike against Crystal Palace not only killed the game off and earned Chelsea a much-needed victory over their South London rivals, but was his third goal in two appearances for the Blues. The Premier League’s bad boy may have looked like a shadow of his former self for the first-half of the season, but with Jose Mourinho gone he now seems back to his rip-snorting best in front of goal and set up Oscar brilliantly for the opener.