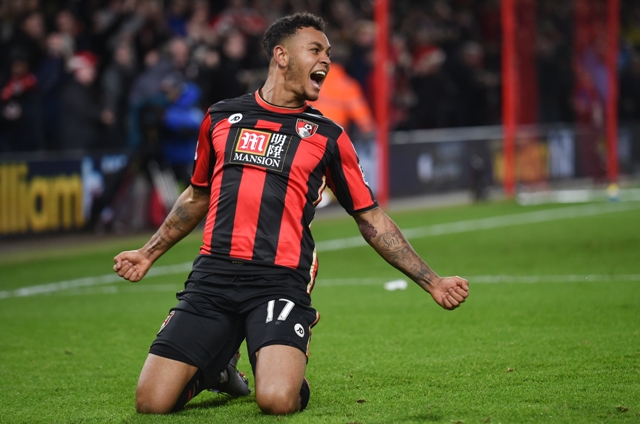 IT WAS ANOTHER EVENTFUL WEEKEND AS THE IDENTITY OF THE PREMIER LEAGUE LEADER CHANGED THREE TIMES, WITH MANCHESTER CITY, ARSENAL AND FINALLY LEICESTER CITY WINNING IN CONSECUTIVE DAYS. ONE OF THE BIGGEST SHOCKS WAS BOURNEMOUTH’S 2-1 VICTORY OVER MANCHESTER UNITED, BUT HOW MANY OF THEIR PLAYERS MADE OUR TEAM OF THE WEEK?

Manchester City returned to the top of the table on Saturday, albeit briefly, and it would not have been possible without Joe Hart. The England No.1 admitted afterwards that his side were “awful” in the 2-1 win over Swansea City and they would have been punished had the 28-year-old not pulled off a string of excellent saves.

It has been a mixed bag this season for Watford’s full-back. He was one of his team’s standout performers earlier in the campaign before suffering a dip in form. But he was back to his best in the 1-0 victory at Sunderland as the Cameroon international constantly marauded up the right flank and helped set up the game’s only goal.

Injury to skipper Tommy Elphick could have severely hampered Bournemouth’s hopes of staying in the Premier League – having already lost Callum Wilson, Tyrone Mings and Max Gradel to lengthy lay-offs. But Eddie Howe’s decision – albeit forced – to switch right-back Simon Francis to the centre has paid off. Francis used to play in the middle in his youth and admits he sees his future there and Saturday’s 2-1 win over Manchester United once again showed why with another commanding showing.

Jonas Olsson almost stole the headlines with his goal against Liverpool and had another ruled out for offside. But while he played extremely well, it was his centre-back partner Gareth McAuley who stood out for us. The Northern Ireland international was a tower of strength and he relished the physical battle with Christian Benteke. The fact Divock Origi’s equaliser took a massive deflection off McAuley was a cruel turn of fate after his superb showing.

Christian Fuchs made a real impact at both ends of the pitch during Leicester City’s 2-1 win over struggling Chelsea. The Austrian pushed on to good effect and his long throws terrorised the Blues defence. And at the back, the 29-year-old made a couple of crucial blocks to help the Foxes return to the Premier League summit.

One of the inadvertent benefits of Arsenal’s injury problems is that Aaron Ramsey is being allowed to play in his best position through the middle. Arsene Wenger took to mocking the fact Ramsey wants to play in the centre earlier this month, joking he would dust his boots off to play in the middle so the Welshman couldn’t. But the 24-year-old once again shone in the absence of players such as Francis Coquelin, Santi Cazorla and Alexis Sanchez. The high-energy showing was rounded off when he started and finished a flowing team move for the second goal.

The decision to include Harry Arter is one made with the heart as much as the head. The midfielder once again starred in the Bournemouth team which defeated Manchester United 2-1 but his impressive performance was made even more admirable by the fact it came just a few days after his daughter died during birth. It was an emotional day for everyone associated with the club and he was singled out by Junior Stanislas after his early goal and rightly received a standing ovation from his team-mates afterwards.

It was a toss-up between Palace duo Yohan Cabaye and Yannick Bolasie for a spot in the Team of the Week and it was the centre midfielder who edged it. Manager Alan Pardew described Cabaye’s showing as a “masterclass” and he was right. It was a complete midfield performance and the club’s record signing even scored the winning goal in the 1-0 victory over Southampton.

The fact Riyad Mahrez had taken as many column inches as record-breaking Jamie Vardy in recent months says everything about the level the Algerian is playing at. He was superb once again in the 2-1 win over Chelsea, crossing for the opener before scoring a delightful second. After the game Claudio Ranieri stated the duo are priceless and not for sale. It would be a surprise if someone did not test that in January.

Joshua King terrorised his former club Manchester United at the weekend, even before he went on to score the winner. The majority of players do not celebrate against their old teams but the 23-year-old showed what it meant to him as he slid to his knees. Having only made two substitute appearances at United – and with Alex Ferguson allegedly not speaking to him throughout his time at Old Trafford – King played like he had a point to prove. He certainly did that.

There was only one man to lead the line this week and that is Olivier Giroud. The Frenchman has still not won over a section of Arsenal’s fans despite scoring his 11th goal in 13 matches and 27th of the calendar year. But even the haters could not deny he was outstanding in the 2-0 win over Aston Villa, as he scored from the penalty spot to make it 50 goals for the club.

WHO WAS YOUR PLAYER OF THE WEEKEND? AND DO YOU BELIEVE WE MISSED ANYONE OUT? HAVE YOUR SAY IN THE COMMENTS SECTION BELOW…