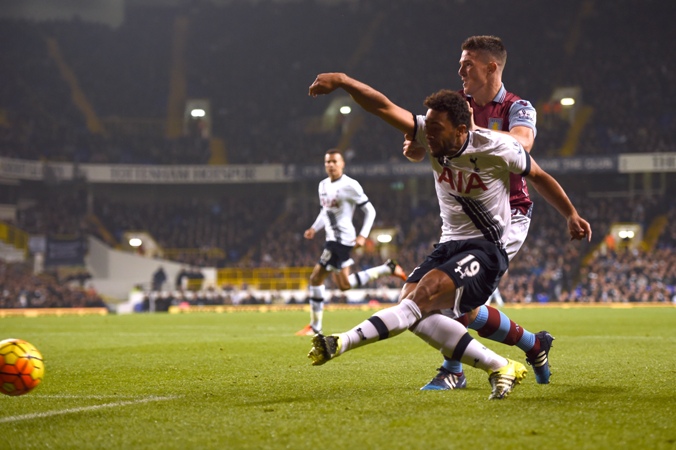 WHILE THINGS CONTINUE TO GO WRONG FOR CHELSEA, LONDON RIVALS ARSENAL AND TOTTENHAM BOTH BAGGED KEY WINS THISE WEEKEND. HERE’S OUR FANTASY XI FROM WEEK 11 OF PREMIER LEAGUE ACTION. LET US KNOW WHAT YOU THINK, AND WHILE YOU’RE HERE WHY NOT CHECK OUT ALL OUR PREMIER LEAGUE KITS IN OUR ONLINE SHOP BY CLICKING HERE.

England’s No.1 in waiting or forever consigned to be Joe Hart’s understudy? Only time will tell, but displays like his one at Newcastle to earn Stoke City a point gives Roy Hodgson a welcome headache. Six saves at St James Park takes him to 46 for the season – more than any other top-flight stopper.

Whisper it, but Arsenal are looking like the real deal this season. There has never been any question about their collective ability going forwards, but their rearguard has never been reliable enough to be title contenders. Koscielny is helping to change all that and he added a goal at Swansea as a bonus.

The Argentina defender notched his first Manchester City goal in the narrow home win over Norwich City that kept his team top of the Premier League. He was supreme defensively too alongside Vincent Kompany to the extent that Eliaquim Mangala may struggle to win his place back.

Manchester City, Arsenal, Liverpool and Chelsea could not stop all-conquering West Ham, but Watford did. And it was the tenacity best displayed by Nathan Ake when he won the ball from Andy Carroll to create Odion Ighalo’s opening goal that proved the difference.

There really is no stopping Leicester City it seems. Up to third in the league with the country’s most in-form striker in their ranks in Jamie Vardy, yet it was Riyad Mahrez who stole the show at West Brom. The midfielder struck twice and now has eight for the season.

Tearing Chelsea to shreds these days is perhaps not as impressive as it once was, but when you do it as stylishly as Philippe Coutinho managed on Saturday lunchtime then you cannot help but sit back and admire. Two superb finishes helped heap woe on Jose Mourinho’s troubled team.

Signed from MK Dons in January, teenager Alli would have been eased into the fray by most Premier League clubs. But Mauricio Pochettino believes if you are good enough, you’re old enough and Alli is reaping the rewards, scoring the second goal in Tottenham’s 3-1 defeat of Aston Villa to mark an impressive all-round display.

“He’s magic”, chant the Everton fans about Gerard Deulofeu and if you want to know why then watch his display against Sunderland. He toyed with and destroyed Sam Allardyce’s team, scoring one and setting up two more in a 6-2 victory.

Belgium midfielder Mousa Dembele can be so frustrating. Bundles of ability, but seemingly no idea what to do with it has perhaps held him back in his career. Yet he was superb against Aston Villa for Spurs on Monday, to follow up a fine effort against Bournemouth last weekend. He is peaking at a great time for club and country.

If Watford are going to survive in the Premier League then it is going to be because of Odion Ighalo. Two goals against West Ham took him to seven for the season and Watford up to mid-table. Move over Elton John, the Hornets have a new hero.

You could never label Arouna Kone prolific and some may be puzzled as to why manager Roberto Martinez shows such blind faith in the Ivory Coast forward. But, for 90 minutes at least, his doubters were silenced as Kone hit a hat-trick in Everton’s demolition of Sunderland.