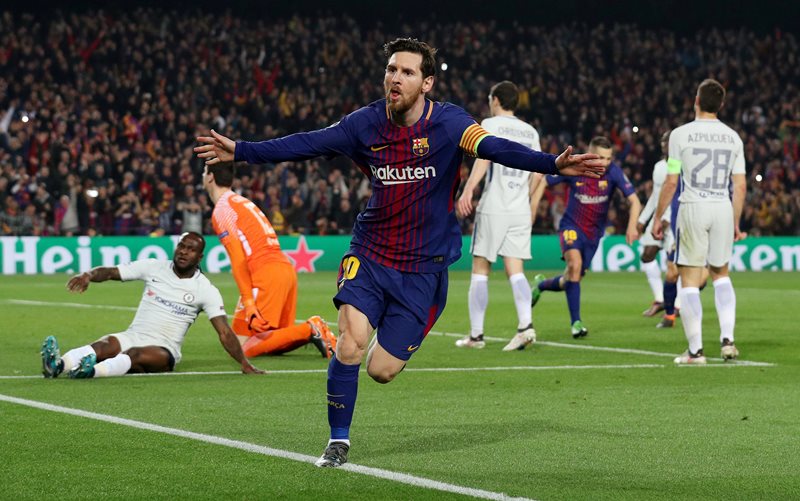 Who should the English clubs fear in the Champions League quarter-final draw?

While Pep Guardiola’s all-conquering City and Jurgen Klopp’s troops may have progressed with minimal fuss, breezing past Basel and Porto respectively, Chelsea, Manchester United and Tottenham Hotspur didn’t find things quite to their liking, with all three dumped out of Europe’s premier cup competition.

Ahead of Friday morning’s quarter-final draw, we’ve taken a look at the sides City and Liverpool will want to avoid being paired with.

Perhaps it seems an obvious one but Barcelona remain as fearsome a prospect as ever.

Ernesto Valverde’s side appeared to have suffered something of an identity crisis earlier this season as they coped with the loss of Neymar to Paris St Germain but they’re top of La Liga and they demonstrated just how devastating they can be as they humbled Chelsea 3-0 at the Nou Camp on Wednesday night, inspired by the brilliance of Lionel Messi.

January signing Phillipe Coutinho may be ineligible but Barca have the prodigiously talented Ousmane Dembele fit and firing again.

The other Spanish giant, Real Madrid are one of the most dangerous beasts lying in wait in the quarter-final draw given just how highly they covet Champions League success this term.

Real are the competition’s most successful side and, after back-to-back triumphs, could etch themselves in history once again by becoming the first team to become European champions three times in a row.

With their league season faltering, the majesty of the Champions League is seemingly contributing to keeping club legend Zinedine Zidane in a job and Real have the talent to put any side in world football to the sword.

You may be surprised not to see Champions League stalwarts Bayern Munich or Juventus next in this list but perhaps City and Liverpool should beware the underdog.

Sevilla won the Europa League three times in a row between 2013-14 and 2015-16 and Liverpool are more than familiar with what Los Rojiblancos are capable of, having conceded five goals as Vincenzo Montella’s men twice came from behind to earn a share of the spoils during this season’s group stages.

Of course, Sevilla then went on to deservingly upset Manchester United in the last 16 and only Cristiano Ronaldo has scored more Champions League goals than Wissam Ben Yedder this term.

City and Liverpool’s two Premier League meetings this term have been as high-octane as they come.

City romped to a 5-0 victory at the Etihad Stadium in a game that saw the Reds’ Sadio Mane sent off while at Anfield in January, Liverpool claimed a pulsating 4-3 victory over Guardiola’s men.

A two-legged quarter-final tie would provide plenty of thrills for the neutral but neither team would particularly fancy coming up against their domestic rivals.

THE LATEST RANGE OF EUROPEAN FOOTBALL SHIRTS, TRAINING WEAR AND FAN-WEAR FROM EUROPE’S BIGGEST CLUBS IS AVAILABLE TO PURCHASE IN STORE AND ONLINE