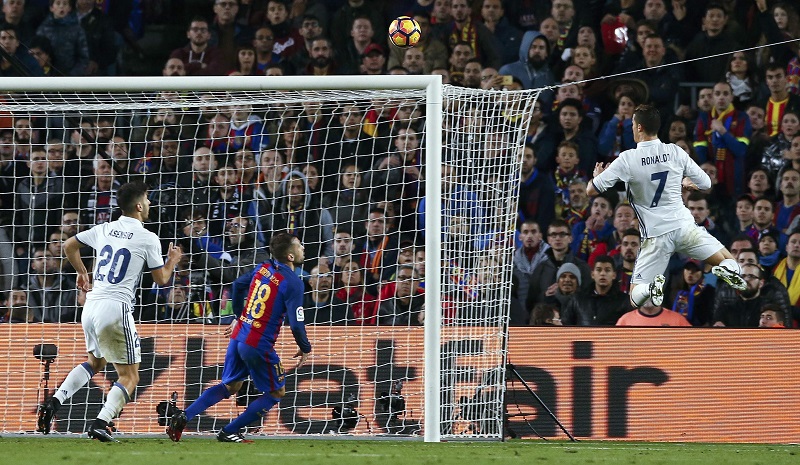 And rarely has the fixture had more riding on it than this season, with league leaders Real Madrid three points ahead of their rivals with a game in hand.

This is surely a must-win for Barcelona; victory would move them level on points at the top of La Liga, but it will be no easy task when they take on the Galacticos at the Bernabeu on Sunday night.

Barcelona have just six league fixtures remaining after the El Clasico with this tussle for the Spanish league title set to go all the way to the death.

Both sides won their respective fixtures on Saturday with Real Madrid edging Sporting Gijon 3-2 and Barcelona seeing off Real Sociedad by the same scoreline.

Barcelona have eight wins from their last ten games with a defeat against Deportivo La Coruna and a 2-0 loss to Malaga the only blots in their copy book.

Leaders Madrid have lost just once in the same time period, a 2-1 reverse against Valencia, but have also been held to two draws against Las Palmas and rivals Atletico Madrid.

Since 1929, there have been 173 league encounters between Real Madrid and Barcelona with the club from the Spanish capital earning 72 wins to their rivals’ 68.

Their most recent league meeting was back in December when Sergio Ramos’ 90th-minute equaliser cancelled out Luis Suarez earlier strike at the Nou Camp.

Luis Enrique’s side thrashed Madrid 4-0 at the Bernabeu last season as Suarez scored a brace with Neymar and Andres Iniesta also getting on the scoresheet.

But Zinedine Zidane got his revenge when Karim Benzema and Cristiano Ronaldo saw Real come from behind to earn a 2-1 win but it didn’t stop Barcelona claiming their 24th league title.

Prior to their huge clash at the weekend, both clubs have the small task of a Champions League quarter-final second leg tie to overcome.

Madrid will be at home when play on Tuesday where they have a 2-1 advantage over Bayern Munich, while Barcelona will be attempting the impossible (again) and overturn a 3-0 scoreline against Juventus.

Barcelona will have 24 hours less time to recover from their European toils, but how both teams get on in Europe could have a major impact on their mindset heading into Sunday’s El Clasico.

THE LATEST RANGE OF BARCELONA AND REAL MADRID SHIRTS, TRAINING WEAR AND FAN-WEAR IS AVAILABLE TO PURCHASE IN STORE AND ONLINE