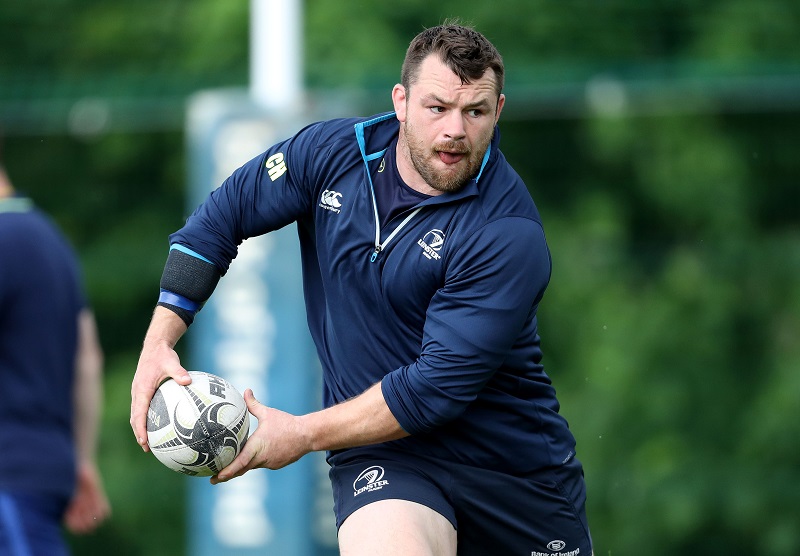 Cian Healy: There’s a big buzz in the Leinster camp for the new season

The summer break has been and gone for Leinster’s rugby superstars as preseason training has already begun, but rather than pining for more time on the beach, for Cian Healy the new campaign can’t come quickly enough.

The 29-year-old loosehead ended the season on a high with the men in green who beat the USA and Japan (twice) on tour and he is raring to go again.

“We’ve had a couple of weeks back in preseason now, and it hasn’t been the worst yet,” he said.

“We’ve been doing a lot of strength work and the fitness has been done through rugby training as opposed to mindless running.

“That is always a bit more enjoyable. It’s always so exciting coming in for preseason and there’s a big buzz around the Leinster training camp.

“It felt like it came around pretty quick but it’s very enjoyable at the same time, and we had our first preseason game the other day.

“I was really happy to get some games in for Ireland and get the time on the pitch. It was a great tour as well – I really enjoyed feeding off the energy and getting three 60-minute run-outs in a row was really valuable.

“I finished up the season in good shape, so I can attack the start of this one now when I get the chance.”

While any Ireland aspirations will now be put on hold until the autumn internationals in November, Healy has plenty to look forward to with Leinster – a new-look Guinness PRO14 league awaits, as well as another tilt at European Champions Cup glory.

With the addition of two new South African sides, the Cheetahs and the Southern Kings, the league has been split into two seven-team conferences, and Healy has been doing everything he can to prepare himself.

He said: “I took some time off over the summer after the Ireland tour of course, but I kept doing some training during that as well as you never want to drop too far behind!

“I’m always down on the beach swimming, but that’s more of a recovery thing as it’s right next to my house.

“It’s more gym work when you’re away from training, trying to keep your muscle mass up as it usually drops off a bit.

“And I also rented a cross trainer for the house this year, to keep myself fit while I wasn’t in working.

“From here until the start of the season, we won’t be making too many changes to what we’re doing. We’re already playing a lot of rugby, it’s more strategy – that’s the most important part of it.

“The contact levels will probably go up a little bit more, and we’ll be plugging away at set pieces too.

“We’re all still getting our heads around the conference system a bit, but it’s definitely exciting for the league and an exciting time to be at Leinster.”

A new season means a new playing kit too – and Canterbury have pulled out all the stops to make sure Leinster’s jersey is one of the best around this term.

WATCH: Behind the scenes at the photoshoot for the new home jersey with @tadhgfurlong, @jackmc100 and Johnny Sexton. #OwnTheBlue pic.twitter.com/SWx7gkSwNC

The classic Leinster blue has been mixed with a darker tone in a checked design that catches the eye to create a look that finds the perfect balance between traditional and contemporary – and Healy cannot wait to pull it on.

“I’ve had a look and a feel of it already and it’s a really nice kit,” he said. “I like the two blue colours very much and it’s always an exciting time for us when the new stuff comes up.

“The blue is of course iconic for Leinster fans, and looking good in the kit is a big one for the supporters who are ultimately the ones going out to buy it.

“I like the two-tone blue check, but it’s also not too far away from what the Leinster jersey is – it’s always nice to change things up with little details.

“It’s a lovely piece of kit; there’s certainly something to the ‘look good, play good’ saying, and if everyone who supports us is wearing the jersey it brings them in a little bit closer.

“I haven’t seen the alternate jersey yet – that’s top secret!”

The two-tone shirt also features gold detailing around the neck to add a spark of colour to the slick look – and Healy is hoping he can be the man to ‘Light the Spark’ for his province this year.

He describes himself as a ‘prop with a dream to play centre’ on his Twitter profile, and so perhaps it is no surprise that it is a swashbuckling midfield man who most inspired him as a youngster.

He added: “During my school years Felipe Contepomi was certainly the person I remember most ‘lighting up’ the Leinster jersey – and then of course I eventually got to play with him later on, which was special.”