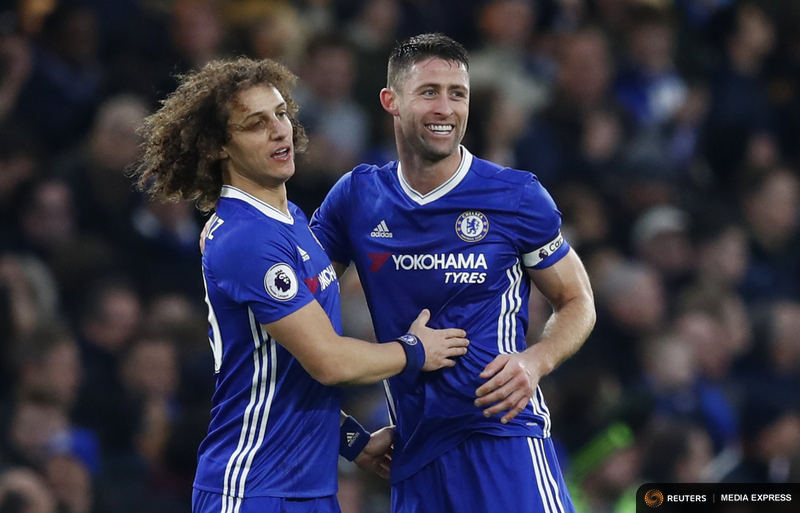 With just 27 goals conceded in a combined 38 Premier League games this season, it’s no wonder the upper echelons of English football are purring over the defences of Chelsea and Tottenham Hotspur.

It’s no secret that solidity at the back is the fundamental foundation of a Premier League title hunt, and in the Blues’ record-breaking 15 goals conceded in 2004/05, Antonio Conte has no better illustration of the potential.

While the Stamford Bridge stalwarts who orchestrated that triumph have mostly moved on, principles in West London remain very much the same.

But with a trip north to face capital rivals Spurs on Wednesday evening, their 13-match winning record is perhaps under its biggest threat so far, themselves taking maximum points from their last four encounters.

And in one of the Premier League’s biggest games of the season so far, we pick out how the game could be won and lost in the backline.

When your manager describes you as the ‘next Gianluigi Buffon’, you can’t be doing too much wrong.

That’s the honour that fell upon Thibaut Courtois this week, and with the esteemed shot-stopper high on the radar of Real Madrid, Conte is desperate to hang on to his main gloveman.

An ever-present this season, the Belgian’s 11 clean sheets in 19 games speaks for itself, also becoming Roberto Martinez’s main man for his national side, with a string of fine saves in the 4-0 demolition of Manchester United a particular highlight.

But in Hugo Lloris comes a mighty challenge to be the top keeper at White Hart Lane on Wednesday.

We are delighted to announce that Hugo Lloris has signed a new contract with the Club, which will run until 2022. ✍? #COYS pic.twitter.com/LKPr1ae0ig

The 30-year-old’s dynamic reflexes – both with point-blank saves and darts from his line – have drawn heavy praise all around the league and in Europe alike, with his mesmeric, scrambling effort against Bayer Leverkusen in the Champions League still leaving those watching scratching their heads.

Yet impressive numbers – 14 league goals conceded thus far – only tell part of the story for a man who also captains the side, impressively leading from the front since his signing in August 2012, with Spurs boasting last season’s best defensive record.

Lloris also averages 2.50 key saves per game, without being at fault for any goal this season, with Spurs losing just twice in the 17 matches he has played.

While Lloris has been a marvel in Pochettino’s plans, the same could be said for Jan Vertonghen and Toby Alderweireld at centre-half.

Considered one of the best pairings in the league last season, the pair continue to go from strength-to-strength – even with the injury problems that have threatened to derail the rhythm.

In Rio Ferdinand, Alderweireld has high praise of being the “best defender in the Premier League” – and it’s hard to believe that this is just his second season at White Hart Lane.

A no-nonsense defender when it’s needed, the Belgian has also earned buckets of praise for his ability to pick an incisive pass, with fans still drooling over his four goals and two assists from last season.

After back-to-back defeats to Liverpool and Arsenal, Conte had to do something to mix up his style. 13 successive wins later, and Chelsea have had no reason to look back.

A 3-5-2 regular with Italy, it was only a matter of time before the 47-year-old brought the style to the Premier League, though it certainly came with some trepidation from the Stamford Bridge faithful.

But with Gary Cahill, David Luiz and Cesar Azpilicueta marshalling a back three, the Blues have become at times impenetrable, starting their run with six successive clean sheets.

And with Marcos Alonso and Victor Moses acting as unlikely wing-backs, their seems to be no stopping Conte’s charges, the latter in particular looking like a player reborn.

.@VictorMoses has been named the PFA Fans’ Premier League Player of the Month for November! ? https://t.co/y31S0Iqxob pic.twitter.com/Tcypgb1Rvz

Defence the best form of attack

Such has been the impressive nature of Chelsea’s defensive unit, Spurs themselves operated a similar balance with the trip to Watford, winning 4-1.

With Danny Rose and Kieran Trippier – deputising for the ever-impressive Kyle Walker – operating the flanks, Harry Kane was afforded more space in the channels to strut his stuff.

And it worked too – in some style as Spurs’ defence was seldom tested as attack proved the more profitable option at Vicarage Road.

With someone as versatile as Eric Dier operating alongside Alderweireld and the improving Kevin Wimmer, it’s a system that now allows flexibility for a team sometimes dependent on Kane and Dele Alli.

But with a new development yet to be fully tested, it will certainly be interesting to see whether Pochettino elects to match up with Conte, with both teams looking impressive in attack with four goals in their last outing.

Either way, we’re set for an exciting encounter.

YOU CAN SHOP All 20 PREMIER LEAGUE TEAMS NOW AT LIFE STYLE SPORTS WHERE YOU CAN ALSO GET YOUR SHIRT CUSTOMISED WITH YOUR FAVOURITE PLAYER’S NAME.