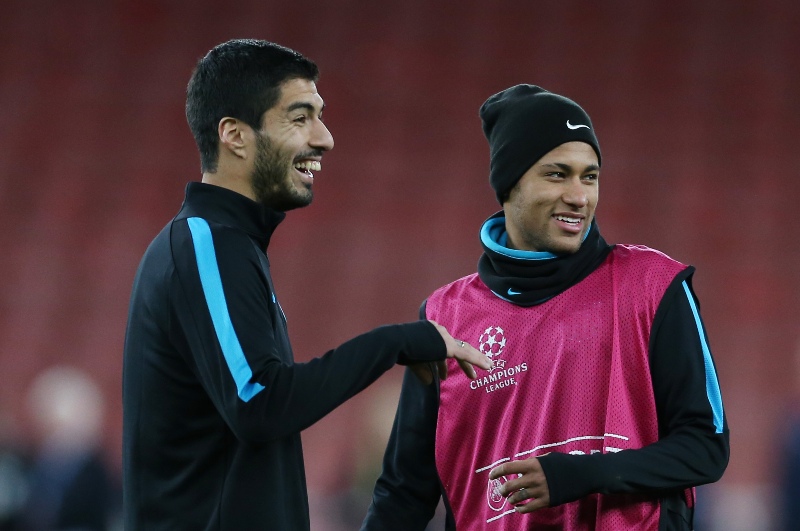 The Gunners host the holders in the round of 16 first leg at The Emirates Stadium tonight bidding to avenge defeats in 2010 and 2011 as well as the 2006 final.

Barcelona sit eight points clear at the top of La Liga and their attacking triumvirate of Lionel Messi, Luis Suarez and Neymar have contributed 91 goals between them this season.

Suarez, who almost missed the flight to London after forgetting his passport, has scored 41 goals in all competitions.

And Wenger, who tried to sign Suarez from Liverpool in 2014, says his side’s priority will be dealing with the Uruguayan.

He said: “We have to keep him quiet on Tuesday night.

“Suarez is the kind of guy who manages to create that team spirit in teams.

Camaraderie; I believe Suarez gives that to a team.

He did it at Liverpool and he did it playing with Edinson Cavani and Diego Forlan for Uruguay.

“Individually all their players are difficult to stop. We have to find a way to do it collectively.

“I believe that apart from the individual talent the front three have, they have a good understanding and cohesion.”

Pep Guardiola will be desperate to win the Champions League with the German title winners before joining Manchester City in the summer.

However, Juventus were last year’s beaten finalists and will be tough competition over the two legs.

Manchester City face a difficult first leg match in Ukraine as they travel to Dynamo Kiev.

The game was originally scheduled to be played behind closed doors, but fans of both sides will now be able to attend after Dynamo’s stadium ban for racist behaviour was reduced.

Eliaquim Mangala and Wilfried Bony, who have both been out for seven weeks, will be assessed ahead of the match.

Kiev will be playing their first competitive game for nearly two months because of the winter break and goalkeeper Joe Hart believes that could be a deciding factor.

“We expect a strong challenge,” he said.

“It depends how you want to look at it, they’re either well rested or they could be rusty with the format of their league season, but that will all be decided after the game.

“They’re obviously in a strong position to be in the last 16 of the Champions League.

“They’re well proven in Europe, so it’s going to be a tough game, especially with a really tough away leg to start with.”

In the remaining clash this week, Diego Simeone’s Atletico Madrid will travel to Holland to face PSV Eindhoven, who currently top the Dutch Eredivisie.

Reported Chelsea target Simeone will be keen to win the Champions League with Atletico after coming so close in 2014, when they were beaten by rivals Real Madrid after extra time.