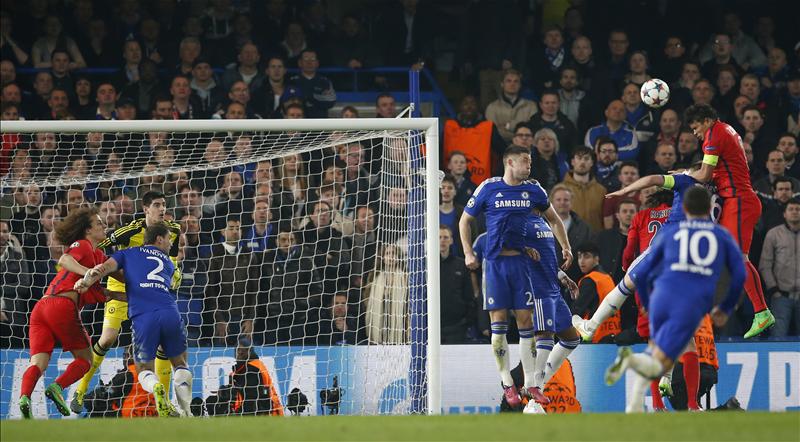 Chelsea will go head-to-head with Paris Saint Germain for the third time in three years in the Champions League when they face each other in the round of 16 first leg in Paris on Tuesday.

PSG knocked Chelsea out in the same round last season and Guus Hiddink’s side will be out for revenge, despite this season’s poor domestic form.

Then there are Chelsea’s injury worries. Less than a week after it was confirmed that Kurt Zouma would miss the rest of the season, John Terry limped off against Newcastle at the weekend.

“PSG are favourites,” said Hiddink. “They have a good team and when you have such a record, it is tremendous record but we must go there and play with confidence.

They can afford to make changes because they are doing well and are unbeaten and they have more rest than us.”

PSG have now gone a record 32 games without defeat in Ligue 1 and head coach Laurent Blanc admits Terry’s absence would help them in transferring that form onto the European stage.

“John Terry, we know he’s experienced for his club and in the Champions League,” said the former Manchester United defender. “He’s an icon for Chelsea.

“When he came off on Saturday, everything changed: Cesar Azpilicueta to the right; Branislav Ivanovic in the centre… the whole system changed.

His absence would probably change everything in terms of the personnel at the back for Chelsea. We have been preparing to confront Terry in defence. If he’s not there, we’ll adapt.”

It will be Zinedine Zidane’s first Champions League match in charge of Madrid and he will have to do without Gareth Bale, who misses the game with a calf injury.

Zenit St Petersburg face Benfica on Tuesday and it will be the Russian side’s first competitive match in two months, due to their domestic winter break.

Benfica, meanwhile, are three points behind league leaders Sporting Lisbon in Portugal and had won 11 games in a row in all competitions before losing to Porto on Friday night.

These two sides haven’t met since they faced each other at the same stage four years ago with Benfica emerging 4-3 winners over the two legs but Zenit manager Andre Villas-Boas – formerly of Chelsea and Tottenham – is confident a lack match sharpness won’t hold his side back.

He said: “The long winter break is not a problem. We had enough games during our training camps. We made sure that we would approach the Benfica match in the best possible physical shape.

We have prepared extensively for the Benfica match, and that is something of an advantage because we haven’t had any other opponents to worry about.”

In the remaining clash this week, Wolfsburg will travel to Belgium to face a Gent side making their first foray into the Champions League last 16.

Wolfsburg knocked Manchester United out of the group stages with a 3-2 win in Germany, though that was the last time they won a game, failing to emerge victorious in five games either side of the winter break.