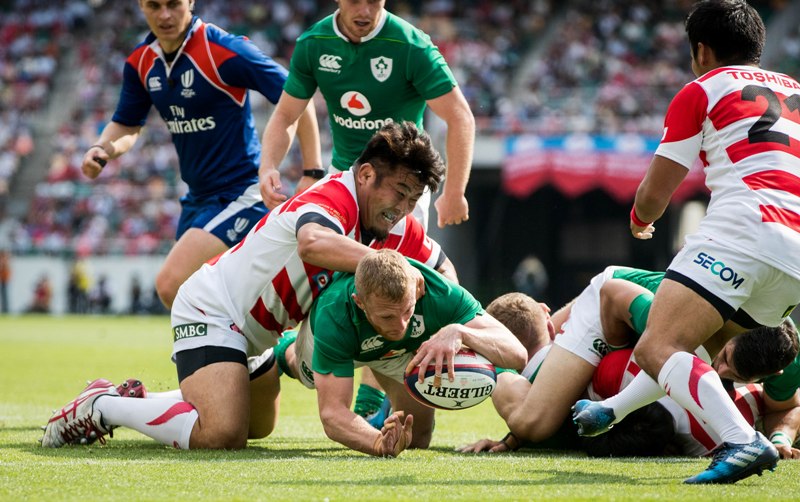 How can Ireland improve in the second Test against Japan?

With the eyes of the rugby world firmly fixed on New Zealand for first Test match on Saturday – it is easy to forget that in the north Pacific there is another Test series going on.

Ireland dispatched Japan with relative comfort in their first contest last week, winning 50-22 against the 2019 World Cup hosts – who they will meet in Pool A.

All things appear to be rather rosy in Joe Schmidt’s garden, but with so many Ireland players away with the Lions – he knows things are far from perfect.

The two nations do battle once more this weekend in the second and final match of the Tour – and the wily Schmidt will already be focussing on an improved display.

Here we take a look at how they can get even better and beat Japan again:

TIGHTEN UP AT THE BACK

Ireland may just be the best defensive side in world rugby – the way they strangled the life out of England in the RBS 6 Nations a few months ago, and beating world champions New Zealand proved very few teams can get through the green wall.

Yet Japan scored three tries and 22 points – more than the combined 18 Ireland shipped to England and France in the 6 Nations.

Okay, this is a comparably weak Ireland side – but their backs still consist of first-team players Garry Ringrose, Simon Zebo and Keith Earls, plus fly-half Paddy Jackson.

Joe Schmidt even said after the match he was impressed by how his side defended but considering Japan produced a damp squib of a performance – surely 22 points is far too many?

Ireland’s focus in this series seems to be on their attack, and rightly so. They have often struggled to unpick the world’s best defences and games against Japan offers a chance to perfect those skills.

But the home side, who famously beat South Africa at the 2015 World Cup, are unlikely to be so disappointing again – and if they play at a high intensity, they could rattle Ireland.

The men in green will surely win, but if they can tighten up and ensure Japan enjoy less success with ball-in-hand then everyone will leave happy.

Ireland have an embarrassing amount of riches at fly-half with, perhaps, the best in the world in Johnny Sexton currently strutting his stuff with the Lions.

But as Sexton gets older and his influence slightly decreases, the prospect of Paddy Jackson coming to the fore increases.

Jackson has always been destined for the Test jersey, but only in the last 12 months has he started to deliver on his undoubted potential.

The Ulster player may not be on the verge of taking Sexton’s place but with the Lion suffering plenty of injuries in the past couple of years, his importance has increased.

So Ireland need to do all they can to protect the 25-year-old, who suffered rib and shoulder injuries in the first Test.

Like George Ford for England, Jackson is crucial to the way Ireland attack – so protecting him is essential. Both for now and the future.

EYE ON THE FUTURE

With so many Ireland regulars away, Schmidt has taken the opportunity to dish out the caps and test new players at international level.

They should only improve after the opening Test match and Schmidt must offer encouragement – not criticism if they make mistakes.

This may be the heart of the side that launches an assault on the 2019 World Cup and should be nurtured.

Schmidt should give all of the playing party plenty of time on the field, only then will he be able to assess what he has going forward.