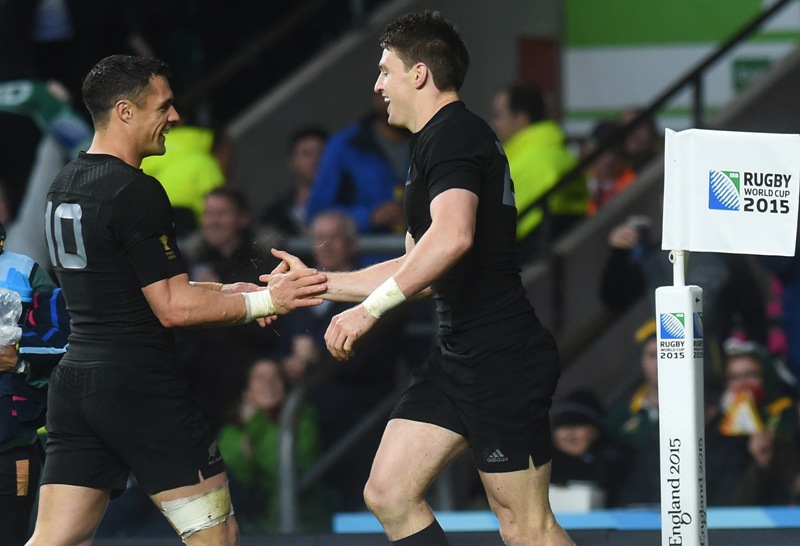 Can Beauden Barrett be better than Dan Carter?

While the English will always argue the case for Jonny Wilkinson, New Zealand’s Dan Carter is perhaps the best fly-half that rugby has ever seen.

So when the 34-year-old announced his international retirement at the conclusion of the 2015 Rugby World Cup, he left big boots to fill – step forward Beauden Barrett.

The current first choice fly-half for the All Blacks has just picked up World Rugby Player of the Year for 2016 and is running the show for the Kiwis in Carter’s absence.

Congratulations to the @AllBlacks for cleaning up at the @WorldRugby awards last night & also @beaudenbarrett winning player of the year.

He converted three tries and kicked a single penalty in Chicago against Ireland a fortnight ago and after resting during All Blacks’ 68-10 over Italy, he returns for the rematch with the Men in Green on Saturday.

So who would the All Blacks rather have trotting out in the No.10 jersey to face Ireland in Dublin – Carter or Barrett?

The case for Carter

Winning the 2015 World Cup in England, before leading Racing 92 to the Top 14 title and the European Champions Cup final last year, proved Carter is still a world-class player.

And that’s not mentioning the 1598 points he scored at Test level, more than any other player past or present, at an average of 14 points a game.

There is not much that Carter has not won in his career with four Super Rugby titles as part of the Crusaders, World Cup successes with the All Blacks and countless Rugby Championship victories.

Granted he has played in some of the best teams in the game’s history but Carter, who earned over 100 All Black caps, still created plenty of moments of individual brilliance.

Two years after his international debut against Wales for example, Carter produced the performance of all performances against the British & Irish Lions in Wellington.

He scored 33 total points in a 48-18 win during which, as well as notching two tries of his own, he was instrumental in setting up Tana Umaga for the opener.

The case for Barrett

Barrett has only come to the attention of some rugby fans since Carter’s move to France but he actually made his international debut against Ireland back in 2012.

He already had an Under-20 World Championship to his name by that point and has racked up nearly 50 appearances in an All Blacks shirt since then.

The 25-year-old scored a try in the World Cup final win over Australia at Twickenham last year and cemented his place as first choice fly-half during this year’s Rugby Championship.

And while Carter lost 12 times in his 112 international appearances, a win percentage of 88, Barrett has a 92 per cent success rate with just three defeats in his 47 matches for the All Blacks.

Hard work out there tonight, boys will be sore tomorrow! Always great to play in front of a passionate Argentinian crowd. pic.twitter.com/fFstdtd01f

THE LATEST RANGE OF ALL BLACKS & MAORI ALL BLACKS RUGBY JERSEYS, TRAINING WEAR AND FAN-WEAR IS AVAILABLE TO PURCHASE IN STORE AND ONLINE. CLICK HERE TO SHOP NOW.