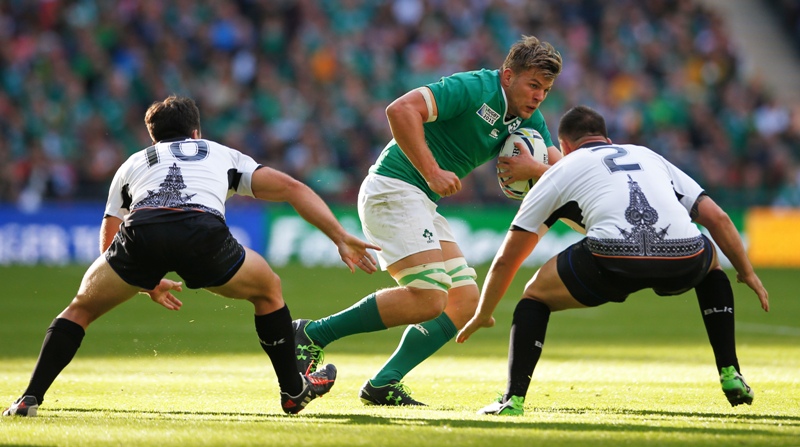 Jordi Murphy has been waiting patiently to get stuck into the Rugby World Cup and, with the quarter-finals on Ireland’s doorstep, the wait could be over.

Ireland’s well-established back row was ripped apart last weekend in victory over France, as Peter O’Mahony was carried off on a stretcher and fellow flanker Sean O’Brien lashed out at Pascal Pape.

While the former will miss the rest of the tournament, the latter – Murphy’s Leinster team-mate – is banned for their clash with Argentina in Cardiff this weekend, not to mention a tournament-ending injury to captain and lock Paul O’Connell.

For the men in green those setbacks are a concern but for Murphy, they present an opportunity to showcase his skills on the biggest stage of all.

“It has been tough,” said the 24-year-old. “It’s disappointing when they name the team and you’re not in it but I was always saying that my main role was to get to the World Cup and from there, it was to play well.

It’s just one of those things you have to take on the chin.

“They’ve gone with other selections and you’ve got to put your disappointment and frustration aside and just work on for the collective.

“I have got to support the boys straight away and do everything I can to make them be the best team they can be on the weekend and train as hard as possible.”

Argentina are not short of threats, having scored more points than any other side during the World Cup pool stages and Ireland will have their work cut out on Sunday.

But their strength in depth is hard to deny, especially given the way Joe Schmidt’s side stepped up against France last Sunday having seen Johnny Sexton, O’Connell and O’Mahony all forced off, to secure victory and finish top of Pool D.

Now Murphy is hoping to help showcase that depth – not least in the set piece, where Ireland will miss O’Mahony.

“I’ve worked very hard on my lineout in the last few months,” he added. “I think it’s one of the things that I would have tried to emulate from Peter when I was running at six and playing there earlier on in games and in pre-season games.

“It’s definitely one of the things that he brings to the squad, that explosivity in the air, his quick read time. I suppose I’ve been trying to learn from him in the last while and if I get a go, hopefully I’ll be able to do it justice.”