England and France made winning starts to their Six Nations campaigns, while Ireland’s draw with Wales instantly opens up the championship. We take a look at what you can expect in Paris, Cardiff and Rome this weekend? 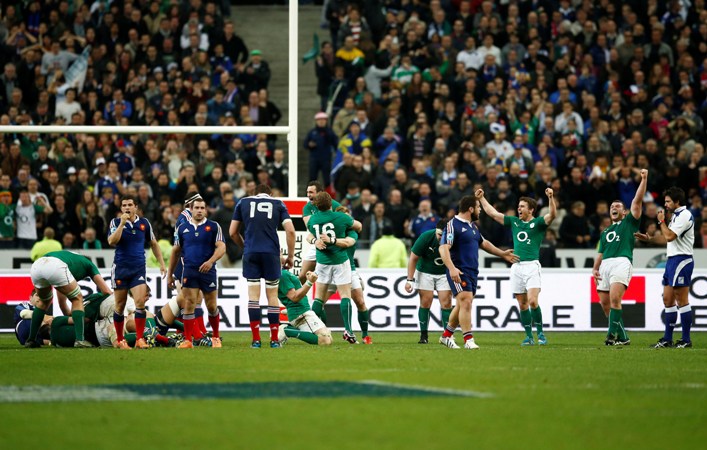 Ireland were victors in Paris in 2014. Action Images / Andrew Boyers

Ireland’s Grand Slam hopes ended in a thunderous 16-16 draw with Wales at the Aviva Stadium, but their quest for a record-breaking third successive title remains alive as they prepare to face France in Paris.

The French hold a significant advantage in the head-to-head but have not beaten the reigning Six Nations champions since 2011 at the Aviva Stadium.

Les Bleus finished no higher than fourth in the Six Nations under Philipe Saint-Andre, collecting the Wooden Spoon in 2013 and Ireland are undefeated at the Stade de France since 2010.

Irish debutant CJ Stander was a man possessed against the Welsh, making 23 carries to fill the large Sean O’Brien shaped hole in the back row and he starts again at blindside.

Joe Schmidt has been forced into reshuffling his back division. Keith Earls and Simon Zebo are both ruled out and are replaced by brothers Rob and Dave Kearney, with Fergus McFadden on the bench.

Up front, Tommy O’Donnell is unfortunate to lose out to the returning O’Brien and he drops to the bench in place of Rhys Ruddock, while Eoin Reddan replaces Kieran Marmion and Richardt Strauss comes in for Sean Cronin.

With Les Bleus conceding a tournament high 19 turnovers as they squeaked past the Italians 23-21 at the Stade de France, Stander, O’Brien and vice-captain Jamie Heaslip will be integral in attempting to give captain Rory Best his first win since being given the armband.

Influential Toulouse star Louis Picamoles is out for the remainder of the tournament, with Damien Chouly shifting to No8 and Picamoles’ club-mate Yacouba Camara starting on the openside.

Maxime Mermoz replaces Toulouse centre Gaël Fickou, who is unavailable for family reasons and Teddy Thomas comes in on the wing for Hugo Bonneval, who will be among the replacements.

Props Eddy Ben Arous and Rabah Slimani both drop to the bench and are replaced by Jefferson Poirot and Uini Atonio respectively, with Akexandre Flanquart promoted to partner Yoann Maestri in the second-row ahead of Paul Jedrasiak.

Warren Gatland will be grateful to his medical team for ensuring star playmaker Dan Biggar is fit to face Scotland at the Principality Stadium on Saturday.

Osprey Biggar has recovered from an ankle injury picked up inside 20 minutes last weekend to start ahead of Rhys Priestland and Gareth Anscombe returns from his hamstring strain to take Alex Cuthbert’s place in the 23.

The Scots’ renaissance under Vern Cotter was stifled by a clinical England side at BT Murrayfield last week, but the New Zealander has resisted any urge to make wholesale changes, instead bringing in only Saracens centre Duncan Taylor for the injured Matt Scott.

Scotland finished winless in the Six Nations last year, but under Cotter they have their best chance of a first victory in Cardiff since 2002.

Last week’s performance certainly offered Jacques Brunel hope, but Italy are without a win in competitive senior games against England ahead of Sunday’s clash at the Stadio Olimpico.

A Sergio Parisse inspired Azzuri pushed France all the way and look to have found a livewire outside-half in Zebre’s Carlo Canna.

England remain firm favourites and defensive coach Paul Gustard is all too aware of the costs of complacency against the Italians, having been part of the ‘A’ team that was the first English side at any level to lose to Italy.

Man of the Match: Robbie Henshaw