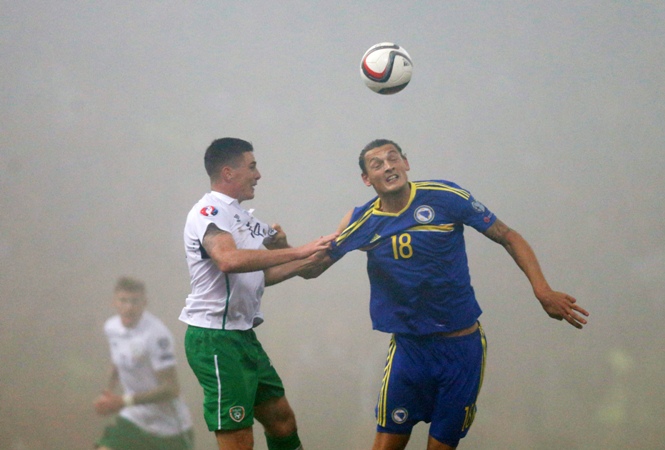 Defender Ciaran Clark admits Republic of Ireland saw another side to Bosnia & Herzegovina on Friday, one they hope to combat tonight to book their place at next summer’s European Championships.

Ireland drew 1-1 in Zenica with Robbie Brady’s goal cancelled out by Edin Dzeko as Bosnia dropped plan A and adopted the direct approach in the closing stages.

And Clark says they could be in for more of the same tonight, though backs his team to get the result required to win the play-off.

“We watched a lot on Bosnia and they’re very good players, all very talented and very dangerous,” said the 26-year-old.

“The style of play changed for them towards the end of the game, they started to go a lot more direct, especially towards the end and tried to cause us problems that way.

“They tried to play in the first half and then mixed it up a bit by going long, but towards the end, they were going really direct and maybe that’s something I didn’t expect.

“Being part of that and playing in the game, I know what they’ve got and so do the other lads, we know where their strengths are.

“It’s going to be a very tough game for us, and hopefully we can make it just as tough for them.”

With an away goal behind them Ireland go into tonight’s match as favourites to advance from the two-leg encounter.

But Clark is taking nothing for granted.

“It would be a massive honour for myself and all the lads to get there, but there’s still a job to be done here and it will be a tough task,” he added.

“We managed to keep them fairly quiet for the most part of the game, but we were disappointed when we conceded.

“It’s something we’ve looked at and hopefully we can put that right and bring that into the game.”