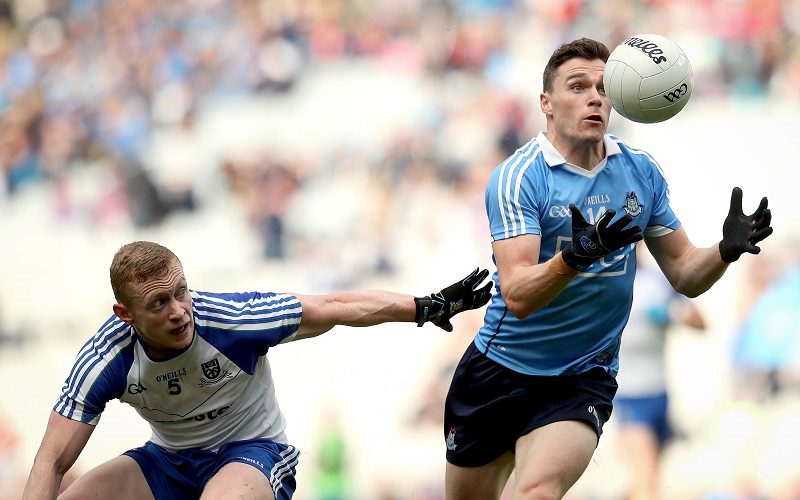 Defending All-Ireland champions Dublin made it look incredibly easy against Monaghan in the championship quarter-finals as they breezed into the last four.

In truth, the game was pretty much settled at Croke Park after Dean Rock’s 40th minute goal as the Dubs went in 1-13 to 0-5 ahead at the half.

There was no way back for the Farney and in the end they lost the contest 1-19 to 0-12 as the Blues now prepare for a stiffer test against Tyrone in the semi-finals.

It was an historic day for Stephen Cuxton who made his record breaking 89th championship appearance for Dublin, producing several super saves from Jack McCarron and Owen Duffy.

Here are some of the best quotes and reactions following Dublin’s procession at Croke Park.

“It’s a great milestone for Stephen,” the Dublin manager enthused.

“It reflects his commitment to Gaelic games and the GAA throughout his adult life. We are very fortunate to have him. Long may it continue. He’s just a fantastic sportsman.

“He really applies himself to his craft. He’s a great leader for us as well — he’s courageous, disciplined and loyal. What’s more, he’s a great influence on the other players too. His work ethic is unequalled. He has everything you would want.

“Obviously, I played with him at the back end of my own career and seen him progress and develop. I have seen first-hand just how purposeful he is and how determined he is to be the best that he can be. He just focuses on his game.”

“We’re delighted, it’s exactly where we want to be. It was a good team performance so we’re happy, feeling pretty good and looking forward to three weeks’ time.

“There’s great depth in this squad and you can see the guys coming on in the last 15 minutes, it’s great to see Paul Flynn and Mick Mcauley back and Bernard [Brogan] too. The team is in a great place at the moment.

“The game can turn pretty quickly, once lapse in concentration and you can let in goals so that’s the real key to stay focussed for the full 70 minutes.”

“We knew coming up we’d have to pay a lot better. Expectation has gone up in the county because we’d been here before.

“We knew it was a tall order, but felt we could put it up to them. After today, Armagh got well beaten, and certainly there are a couple of counties getting that bit stronger and have pulled ahead this year.

“Coming up we knew we had to play way above what we’ve produced this year, but still felt it was within us to do that. We wanted to make sure we set ourselves up well because we’ve seen Dublin get early goals and end games early.”

Massively demoralising defeat. Dublin very impressive but such an under performance from Monaghan. #werebetterthanthat

Familiar quarter-final frustration for Monaghan. Dublin a class apart, even against a fairly seasoned Division One team.

Dublin absolutely washed Monaghan aside, they’re such an unbelievable team,the semi final will be a great watch I can’t wait! @TyroneGAALive

Monaghan overwhelmed by a superior Dublin side that kept running at them. More spirited in 2nd half but gap was too large FT 1-19 to 0-12 pic.twitter.com/F7hNdNzdQ2