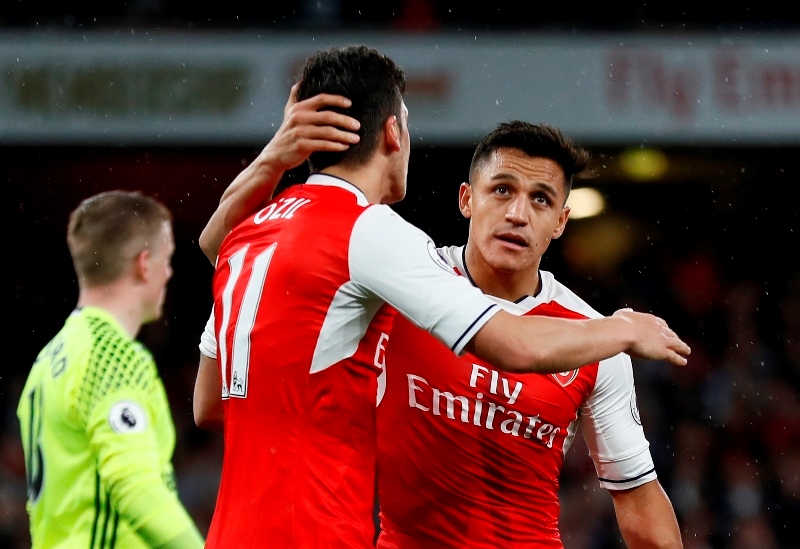 Why Arsenal must hold on to their big guns

Anything goes during silly season and that means that even which players are selected for official kit launch imagery can set tongues wagging during the transfer window.

Does the fact that supposed contract rebels Alexis Sanchez and Mesut Ozil were both selected to show off Arsenal’s new Puma home strip drop a MAJOR HINT about their respective futures at the Emirates Stadium?

In reality, perhaps not – consider that Robin van Persie modelled the Gunners’ 2012-13 strip before promptly moving to Manchester United.

However, and not just from a marketing perspective, it highlights just how important Sanchez and Ozil are to Arsenal and why they must fight tooth and nail to hold on to their two biggest earners this summer.

The wizard of Oz

Such is the picture sometimes painted of the nonchalant, laid-back Ozil that the fact he had enjoyed the best goal-scoring campaign of his career last season gets lost among the sea of accusations of laziness thrown in his direction.

Back in September 2013, the 28-year-old’s signing from Real Madrid, which made him the most expensive German player of all-time with a reported fee of £42.5 million, was viewed as a real statement of intent from Gunners boss Arsene Wenger as he snaffled a top European playmaker yet to reach the peak of his powers.

While he hasn’t been able to inspire Arsenal to a Premier League title, allowing Ozil to leave this summer would represent a major step back for Wenger, who must surely envision the World Cup winner as a part of even the most fanciful of Gunners XIs.

Already a top-class wideman on his arrival at the Emirates from Barcelona in 2014, Sanchez has evolved into one of the most dynamic forwards around during his time as an Arsenal player.

There’s a strong argument to be made that he’s the best player in the Premier League.

Wenger has fallen on his sword and allowed a star to join a major rival before in van Persie but surely it would be unthinkable for the Gunners manager to allow the Chilean to move to Manchester City and link up with former boss Pep Guardiola.

Instead, the Emirates chief would much rather see Sanchez unite with new record signing Alexandre Lacazette, particularly if he continues with the 3-5-2 formation that saw Arsenal win the FA Cup last season.

Convincing Sanchez that he should continue to lay his hat in north London isn’t going to be easy but the Gunners must somehow pull it off.

Of course, Sanchez and Ozil aren’t the only Arsenal players entering the last year of their contracts.

Unlike that high-profile duo, the likes of Alex Oxlade-Chamberlain, Aaron Ramsey and Kieran Gibbs were among those not selected to model the Gunners’ latest red and white jersey.

Is it worth reading something into that? Maybe not.