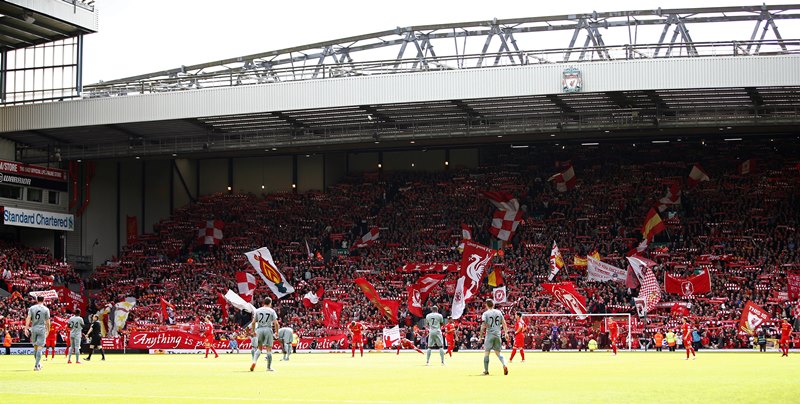 Liverpool are on the brink of bringing those special Champions League nights back to Anfield.

Steven Gerrard pile-driving winner over Olympiakos, the controversial ‘ghost goal’ victory over Chelsea – how many historic more moments could be written at this captivating old stadium?

Some may say, following the expansion of Anfield last summer and the installation of a new main stand, the ground has lost some of its atmosphere and the cauldron which used to make teams tremble has lost its edge.

We think not, and ahead of their crucial final home game of the season against Middlesbrough, here are some of the main reasons as to why Anfield remains one of the best grounds in the world to watch the beautiful game.

Pre-order the new @LFC Home kit now to be in with a chance of winning flights + match tickets to #LIVMID. #PureLFC https://t.co/rd0k8gLu8e

One of the most recognisable stands in the world, the Kop. A bank of almost 13,000 avid Liverpool supporters, or ‘Kopites’ roaring their team to victory is one of the most thrilling spectacles in world football.

Jurgen Klopp is familiar with a huge bank of supporters, having managed Borussia Dortmund in front of their ‘yellow wall’ and he must be loving the rank-upon-rank of unwavering fans singing their hearts out for the cause.

Football isn’t just a sport on the Kop; it’s a religion and entering the stand feels like being welcomed into one large family. The eruption of joy heard when the ball hits the back of the net in front of those avid fans is one that is hard to match anywhere else.

Something isn’t right if you’ve never had goosebumps upon hearing the iconic tune as both sets of players prepare to do battle on the Anfield turf.

The Gerry and the Pacemakers rendition is played over the sound system but is often drowned out by the ferocious singing of the Liverpool faithful.

Whether you are attending in the home end or as an away supporter, there’s always something special about hearing the famous song coming loud and clear from the terraces.

Certain fans used to chant: “Liverpool, HOOF the ball” during the reign of Frenchman Gerard Houllier. Well those days are long gone under German manager Klopp.

The eccentric firebrand has instilled plenty of passion off the pitch and plenty of excitement on it with his ‘gegenpressing’ style lighting up the league and suffocating the opposition when they have the ball.

Klopp has really got starlets Philippe Coutinho and Roberto Firmino dancing to the same samba beat on the pitch, making it a joy to watch them anytime you are in the Anfield crowd.

Not only is there Brazilian flair on offer – but Klopp’s ability to get his players firing on all cylinders for the biggest matches has got the crowd whipped up into a frenzy.

Passion will always endure at this historic club and its iconic stadium, making it one of the best places to watch football.

Crafted with 125 years of history in mind

@liverpoolfc will close out this season wearing their new 2017/18 home kit and to celebrate 125 years of #LFC, we have flights plus match tickets to Liverpool Vs Middlesbrough at Anfield on May 21st.

To be in with chance of winning, pre-order the new Liverpool 2017/18 home or goalkeeper jersey in store or online at lifestylesports.com to be automatically entered into the draw to win!

Competition closes at midnight on May 17th, T&Cs apply #PureLFC